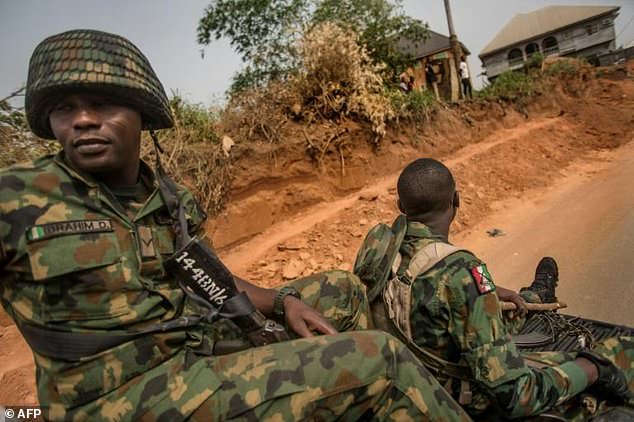 No fewer than 10 Nigerian soldiers have been killed and nine severely injured in an ambush by suspected Boko Haram fighters in restive northeast Nigeria, military sources said Thursday.

Another 12 soldiers were missing after a column of troops on patrol was ambushed by the jihadists on Wednesday in Damboa district of Borno state, a military officer told AFP on condition of anonymity.

“We lost 10 troops in the intense fighting with the terrorists who ambushed our soldiers conducting a clearance operation in the area,” said the officer, who asked not to be identified because he was not authorised to speak about the incident.

“Nine soldiers were injured and 12 are still missing.”

The decade-long jihadist insurgency in northeast Nigeria has killed 35,000 people, displaced two million others and spilt into neighbouring countries.

The troops came under attack while returning to their base in Damboa, 88 kilometres (55 miles) from the state capital Maiduguri, said a second military officer who gave the same casualty toll.

The area of the attack is on the edge of the Sambisa Forest which is a stronghold of the Boko Haram faction led by long-time leader Abubakar Shekau.

Soldiers were forced to withdraw after an hour-long battle in which nine jihadists were also killed, said the second source.

The militants burnt five military vehicles and took away a pickup truck along with six machine guns.

Boko Haram has splintered into two major factions: one loyal to Shekau and the other aligned to the Islamic State group.

There has been a lull in attacks on troops from the jihadist factions in recent weeks as the military has intensified operations against the fighters.

Attacks on Nigerian troops had increased since June last year, with most of the deadly assaults blamed on or claimed by the Islamic State West Africa Province (ISWAP) faction.

ISWAP split from Boko Haram in 2016 and focuses on attacking military targets while Boko Haram is notorious for attacks on civilians. AFP