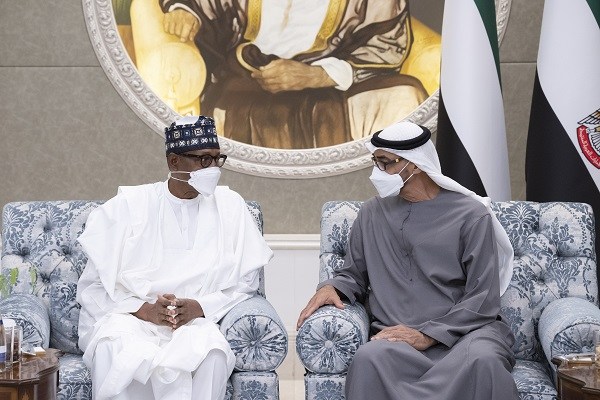 President Muhammadu Buhari has expressed his determination to do more to ensure the growth and intensification of the strategic partnership between Nigeria and the United Arab Emirates (UAE).

The President’s spokesman, Malam Garba Shehu, in a statement on Saturday in Abuja, said Buhari made this known during an interaction with Sheikh Mohamed bin Zayed Al Nahyan, the new Ruler of Abu Dhabi and President of the UAE, during his condolence visit to the UAE Presidential Palace on Friday.

Buhari expressed his condolences and that of Nigeria on the demise of the late President Sheikh Khalifah of UAE and congratulated the new President on his election.

He expressed the hope that under Sheikh Mohamed, the two countries would continue to actively champion a vision of sustainable security, strengthen counterterrorism cooperation, facilitate trade and investment, and promote prosperity and development.

The presidential aide noted that in the seven years of the Buhari presidency, the two countries had actively conducted bilateral dialogues leading to several agreements and Memoranda of Understanding.

According to him, these have paved the way for further cooperation, mutual understanding and progress in many aspects of their bilateral relations.

The News Agency of Nigeria (NAN) reports that the Nigerian leader, who is expected back home on Saturday, had on Friday joined faithful in Abu Dhabi to observe Jummah prayers, at which prayers were offered for the repose of the soul of the late Sheikh Khalifa bin Zayed Al  Nahyan. (NAN) (