179 officers file for retirement from NYPD in one week; cite poor payment 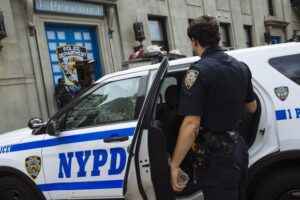 The New York Police Department (NYPD) is grappling with a troubling surge in retirement applications from its officers, according to a spokesperson.

Speaking to newsmen on Wednesday evening, Sgt. Mary O’Donnell, the spokesperson for the NYPD Deputy Commissioner, described the trend as “troubling”.

According to her, 179 officers filed for retirement in one week between June 29 and Monday.

This, she said, represents 411 per cent increase over 35 who filed during the same time period in 2019.

O’Donnell said the NYPD received 503 retirement applications between May 25 and July 3, representing a 75-per-cent increase over the 287 requests in 2019.

According to the New York Post, the officers are citing “a lack of respect and the loss of overtime pay’’.

This is coming amid a spike in gun violence in New York and move by the city to redirect funds from the Police to youth and social services.

Media reports say the city witnessed 74 shooting incidents with 101 victims between June 29 and Sunday, a period of just six days.

The retirement filings also coincide with continuing protests against alleged racially-motivated police brutality since the death of George Floyd in police custody on May 25.

Sources say the retirement rush has caused a bottleneck that is forcing other intending officers to delay submitting their applications.

“While the decision to retire is a personal one and can be attributed to a range of factors, it is a troubling trend that we are closely monitoring.

“The department is not turning down any applications for officers retiring in the next 30 days.

“But it has told cops putting in to retire after that to come back when a month out due to the increased activity,’’ the NYPD spokesperson said.

New York Post quoted police sources as saying a pending city law that would ban officers from using chokeholds to subdue violent suspects is another driver of the trend.

“But there’s no surprise here, who the hell wants to stay on this job?

“Why would you want to stay on this job when people don’t appreciate what you do?’’ the paper quoted an unnamed officer as saying. (NAN)