2023: Our party won’t be an opportunistic vehicle, no automatic ticket for Tinubu, other aspirants – SDP 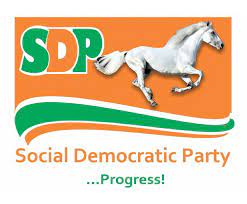 2023: Our party won’t be an opportunistic vehicle, no automatic ticket for Tinubu, other aspirants – SDP

The Social Democratic Party (SDP) says no automatic ticket for All Progressives Congress (APC) chieftain, Asiwaju Bola Tinubu and other aspirants willing to contest for elective positions in 2023 on the party’s platform.

The Acting National Chairman of SDP, Chief Supo Shonibare, who stated this at a news conference in Abuja on Thursday, however, said the party would provide succor for aggrieved aspirants from other parties.

There were speculations that the APC chieftain might likely defect to SDP if he failed to pick the APC presidential ticket.

Shonibare said while those who felt cheated in other political parties could come and join the SDP to pursue their political ambitions in 2023, they should be ready to submit themselves to stringent condition, including integrity test.

He also clarified that the APC chieftain was not a registered member of the SDP.

“On the issue of Asiwaju Tinubu, the last time I checked, he is not a member of the SDP.

“I checked on the list because the membership list of our party as INEC has required, has already been submitted by our state chapters to us in Abuja.

“His name is not among those who are members of our party in Lagos State. That’s all I can say, he’s not a member of SDP,” he said.

He, however, said that Tinubu or any other aspirant from other registered political parties interested to join the party were welcome.

“Yes, we welcome anyone who feels cheated by other political parties, but must be consistent with integrity.

“If he (Tinubu) comes, it won’t be automatic, what we would emphasise is consistency with integrity within the public officer.

“Also anyone who is controversial, rated low or with baggage, who doesn’t have integrity will not be allowed. SDP leadership does not want the party to be an opportunistic vehicle,” he said.

“In instances where we’ve seen great injustices to an individual, who we feel is not coming to us with baggage, yes that individual will be welcome to SDP.

“So we will try to ensure that those who we will welcome into our party, are men and women of integrity, making SDP to be a succor for those who have been wrongly dealt with in their political parties.

On the party leadership crisis, Shonibare maintained that INEC lacked the powers to determine who the authentic leadership of SDP is.

“INEC is not the court of law, so it cannot determine which fact is the rightful leadership of the party.

“It is the constitution of the party, the rules of the party and the determination of the court that will determine who is the legitimate leadership of the party. It is that process that INEC will oblige to accept,” he said.

Shonibare said, while INEC was set up to observe and issue guidelines for conduct of elections, it was not its responsibility to determine a faction to be recognised when there were parallel or faction congresses.

He reiterated the resolve of the Party’s leadership towards ensuring that sanity was restored, adding that there was the need for the party exercise caution.

He said that the party would resist attempt to make the SDP ineffective or ineffectual in the contest for power and render it an ally of the lackluster ruling regime.

“We shall resist the machinations of the burgeoning usurpers,” he said. (NAN)