Do away with ethnicity, religion:Ganduje tells NBA

Gov. Abdullahi Ganduje of Kano State has cautioned the Nigeria Bar Association (NBA), not to allow ethnic and religious bigotry to tear it apart. 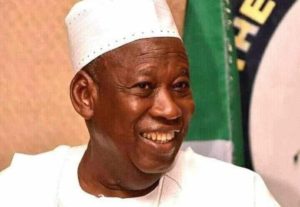 Ganduje made the call in a statement signed by Malam Muhammad Garba, the state’s Commissioner of Information.

According to the statement, Ganduje made the call when the NBA President, Olumide Akpata, paid him a courtesy visit in Kano on Friday.

The statement quoted the governor as saying that internal wrangling in the NBA was most unfortunate providence to befall the association.

Ganduje noted that the trend was inimical to the NBA and the country, adding that the association ought to champion the cause of the rule of law.

“While there are bound to differences, it is better to be united than to be divided, as a conventionally persuasive opinion moulder and group that helps shape public policy, it is never going to fulfil that role if it is divided.

“No one expects the NBA to be invulnerable to bickering associated with any group of people coming together, but as a body of lawyers with outstanding record of achievements in shaping the country for good, it should not allow ethnic or religious sentiments to riven it,” Ganduje was quoted as saying in the statement.

The governor urged members of the association to come together and resolve their differences  by ironing out their views through consensus rather than breaking into splinter groups.

While stressing the need to sensitise its members and seek to accommodate their views on matters of serious concern, Ganduje urged them to mend fences and work toward the good of the association as well as the country at large.

Also speaking, Akpata said he was in the state in continuation of a nationwide tour and expressed satisfaction with the feat achieved by the Ganduje’s administration in transforming the judiciary.

Akpata lauded the governor for the construction of the Court of Appeal edifice, the Ceremonial Court building as well as enhanced welfare for the judicial staff. NAN

Watch out! Wike is coming