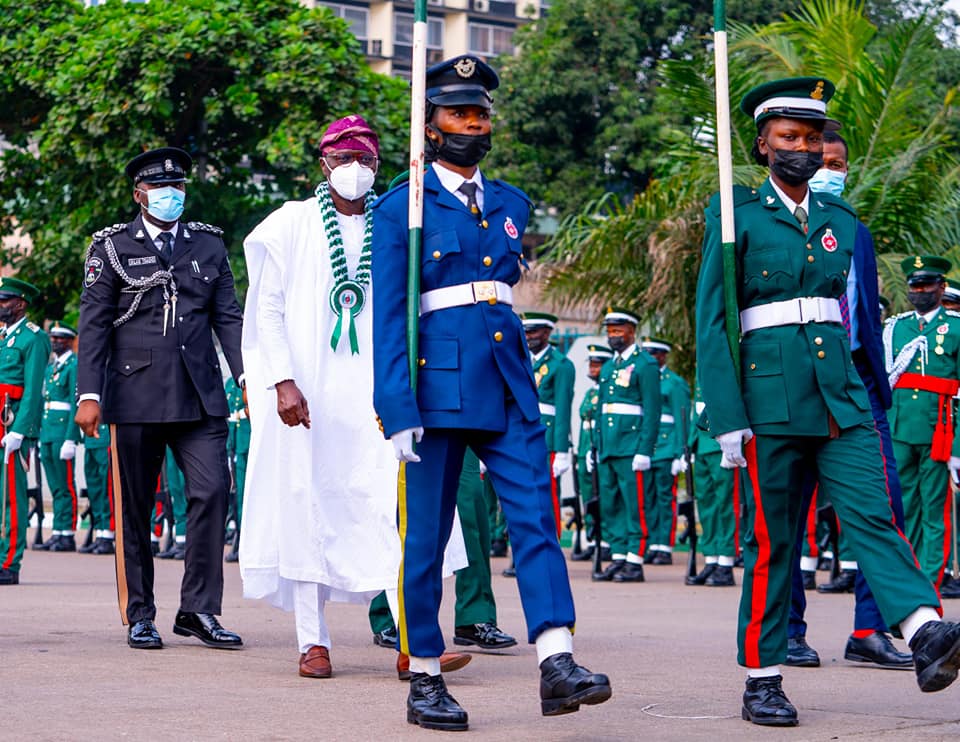 Governor Sanwo-Olu of Lagos state on Saturday, in commemoration of Armed forces Remembrance Day (AFRD), led top officials of the State Government, including the Deputy Governor, Dr. Obafemi Hamzat, and top brass of Nigeria military formations in Lagos State, to the symbolic event held yearly in honour of fallen heroes who sacrificed their lives in defence of the nation’s security and unity.

Officers of the Nigerian Army, Navy, Air Force and veterans in the Nigerian Legion marched in a memorial procession to honour fallen ex-servicemen at the short ceremony held at Remembrance Arcade, Tafawa Balewa Square in Onikan.

The military parade was followed by a traditional 21 gun-salute to honour the valour of the departed service personnel.

After laying the wreath, Sanwo-Olu said the sacrifice made by the fallen heroes was supreme and marked the symbol of the nation’s unity. He charged members of the armed forces to continue to uphold the fine traditions bequeathed to the military by the departed soldiers.

The Governor said the State had not only honoured the efforts of the fallen heroes by participating in the yearly remembrance, he said Lagos had also catered for the welfare of families of departed soldiers living in the State through various intervention programmes.

He said: “Today, we have come out in honour and in remembrance of fallen members of the Nigerian Armed Forces, who, at one time or the other, had been of great service to our nation and paid the supreme price to keep our unity and security. As a yearly tradition, the State Government comes together with military formations and veterans to commemorate this day in their honour and say that their sacrifices are not in vain.

“This is to continue to encourage the men of the Nigerian Armed Forces and to show them that the country will continue to remember them and ensure their efforts are not in vain. As a Government, we have been supporting our soldiers to keep the territorial integrity of this nation secure, while working with them in the areas of intelligence gathering to ensure Lagos remains safe for our citizens and visitors.”

As Lagos Government supports families of fallen soldiers through the Ministry of Women Affairs and Poverty Alleviation, Sanwo-Olu said his administration had not left out military veterans residing in the State in Government’s welfare and intervention programmes packaged for ex-service personnel.

Few days ago, the Governor fulfilled a pledge of N50 million donation to the Lagos Command of the Nigerian Legion, in addition to employing over 5,000 military veterans as security guards across the State-own public schools, hospitals and Government facilities.

He said: “At the State level, we see our ex-servicemen and women as members of our community. We see them as people for whom we have responsibility. We promised we will equip their schools with unlimited Internet access and computers to support their children.

“All of these have shown that we have not abandoned our veterans. We will continue to help servicemen that have retired and create welfare support for the spouses and families of the ones that have departed, because we consider them as major stakeholders in our entire community.”

Other highlights of the event included Islamic and Christian prayers for the souls of the departed soldiers.