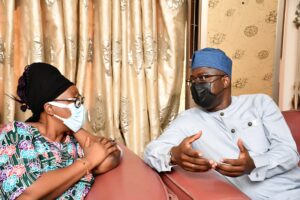 Oyo State Governor, ‘Seyi Makinde, on Thursday, paid a condolence visit to the family of the late former Governor of Oyo State, Chief Adebayo Alao-Akala, saying that the state has lost, “perhaps its most experienced politician” in the former governor.

Governor Makinde, while addressing the widows, family and political associates of the late former governor, at his Opadoyin Lodge residence, Randa area, in Ogbomoso, said that the visit was to officially condole with the family over the demise of someone he described as leader, brother, mentor and grassroots man.

A statement by the Chief Press Secretary to the governor, Mr. Taiwo Adisa, quoted Governor Makinde as saying that the late Alao-Akala, was a lover of Ogbomoso and Oyo State and that he did his best as governor of the state.

He said: “I am here this afternoon on behalf of the government and people of Oyo State, to condole with the family of our departed leader, brother, mentor, former Governor Adebayo Alao-Akala.

“We cannot question God. I still spoke with him five days ago. I said to somebody that I wanted to ask him to come and flag off the road project between Ogbomoso and Iseyin, and the person said to me that I should not make such move, because he would deal with it politically.

“But I put a call across to him and he surprisingly said to me ‘Seyi,  I will be there to  flag it off.’

He asked me to give him only 48 hours notice, choose the date and I was looking forward to it. “But who are we to question God?

“Sometimes, it is not how long but how well and I will explain it to you. Here, we have my brother, Senator Teslim Folarin. I can also see Hon. Segun Odebunmi (Bunvic) and almost all the political leanings in Oyo State are here. We have lost, perhaps, the most experienced politician this state has ever produced.

“Chief Alao-Akala was a grassroots man. He rose from a local government chairman to Deputy Governor, and to an Acting Governor and to a State Governor. Who else has the credentials? Nobody in Oyo State.”

The governor called on family members, friends and well-wishers of the former governor to take solace in the fact that he lived a great life and give thanks to God even in their grief.

“In the moment of our grief, we must remember that God was gracious unto Chief Alao-Akala. So, we still have the opportunity to thank God no matter how much we grieve over his death.

“On my birthday, he sat very close to me. People may think we are not together politically but in terms of love for our state, we are together. He loved this state so much and did his best as the governor of the state. There are others who may not love the state by their actions and decisions.

“He once told me that if we make any mistake, it must be from the head but not from the heart. And I remember I always tell people that, look, I can make a mistake. I was taking a cue from him. So, I want to say the family is not alone in this grief, as we are together. The loss is not only for this family but for the entire Oyo State.

“I pray that God will hold and comfort the family. I want to assure you that we will be involved in all the preparations you will be making concerning the burial. There are a few things that both of us are supposed to do. The ones that are still relevant, I will go ahead and still do them. “We will continue to remember this family in our prayers.”

While thanking the governor for the visit, son of the late former governor, Hon. Olamiju Alao-Akala, thanked Governor Makinde for the prompt response and visitation to the family.

“On behalf of the entire family, we want to thank you for your prompt response and visitation to the family. We appreciate your effort and that of the people of the state. Thank you so much.”

The visit had in attendance the Secretary to the State Government, Mrs. Olubamiwo Adeosun; Chief of Staff to the Governor, Hon. Segun Ogunwuyi; Head of Service, Alhaja Amidat Agboola and other top government officials.