Ahmed Joda, Ex-NCC Chair: Tribute to the Best of the Best 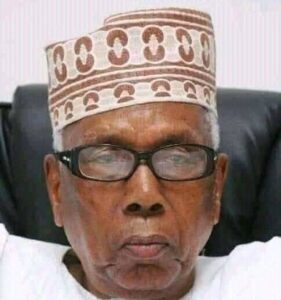 The story of the nation’s telecoms cannot be told without according him his due. Alhaji Ahmed Joda, a former chairman of the Nigerian Communications Commission, NCC, Board was the unseen hand that guided the stream of activities in the commission for a decade, having served for 10 years from year 2000 to 2010.

He helped both the Board and management of the NCC to conduct a world-class mobile digital auction in 2000 which precipitated in the rollout of digital mobile services in the Global System for Mobile communications (GSM) genre to the admiration President Olusegun Obasanjo himself.

He brought on board decades of consummate and unblemished service in the public sector. He belonged to the old brigade of super permanent secretaries, men and women whose service record was a rich slate of integrity, industry, foresight and veracity.

A journalist of note, Alhaji Joda’s early foray into the civil service made him an encyclopedia on the nation’s public sector. But besides that, he’s among the small crowd of public servants described as squeaky clean and downright honest. In fact, before the resurgence of the crusade against corruption ignited by the Chief Olusegun Obasanjo government in 1999, Joda had played avant-garde role in the fight against graft.

A former Assistant Secretary Grade 1 at the Federal Ministry of Education in 1970, Dr Wunmi Akintide, once recalled how Joda who was the Permanent Secretary of the Ministry at that time saved him his job. Akintide said he had blown the whistle on a senior staff of the ministry who was allegedly involved in some sleazy deals with contractors.

And for his whistleblowing audacity, Akintide was slated for dismissal for speaking out against his boss’s penchant for malfeasance. According to Akintide, he would have been unjustly dismissed but for the intervention of Joda whom he described as “clean and honest”. That was the credential he brought to the NCC.

Though the NCC was founded in 1992 with its first board inaugurated in 1993 and later dissolved in 1994, the commission never really enjoyed the type of independence that would enable it discharge its duties effectively. It was therefore to the credit of Joda who was appointed as the chair of the new Board in 2000 that the commission began a new chapter in corporate governance. Through the Board, he steered the NCC to global reckoning with institutions like the International Telecommunications Union (ITU), the United States Agency for International Development (USAID) and the World Bank maintaining strong partnerships with the Nigerian telecom regulator. Under his leadership, the NCC became not only a clear pacesetter in telecoms regulatory matters in the West African sub-region but also on the continent.

From 2000 to 2010, he piloted the Board to give Nigerians hope and the commission a new lease of life. The trophies speak for themselves: growing the nation’s telecoms throughput to become the fastest growing market in Africa and one of the fastest in the world; relocating NCC from a rented apartment to a befitting world class corporate headquarters built without subvention from government and establishing a Digital Bridge Institute (DBI) among others.

The DBI, for instance, has transformed to a capacity building institution not just for the Nigerian market but for the entire continent to solve the problem of dearth of skilled manpower in the telecoms sector. The success recorded by the NCC owes so much to the creation of quality-enhancing and monitoring departments namely Standards, Consumer Bureau and Corporate Planning and Research.

Yet, in spite of this rich scroll of achievements, Joda remained self-effacing, unassuming and humble. Instructively, these traits rubbed off on the entire Board and by extension the commission. The Ahmed Joda effect is a positive vibe which echoes across multi-sectorial institutions including education, petrochemical and telecoms. Little wonder, the former EVC of the NCC, Dr. Ernest Ndukwe, once described him as “the best boss any one could have”.

Ndukwe never failed to give full credit to Joda for guiding him and management through the contours of public sector management and administration which helped to deliver what many Nigerians, and indeed Africans, gleefully refer to as the telecoms revolution.

A hugely decorated public servant (OFR, CON, HLR,) Joda died on Friday 13th of August, 2021 at the glorious age of 91. And tributes have since been pouring in for the Super Perm Sec, quintessential nationalist and beacon of integrity.

The President noted that the late “Super Permanent Secretary” as Joda and some of his colleagues were referred to in the 70s,  “distinguished himself as a remarkable scholar, journalist, intellectual, public servant and farmer”, describing him as “a hero for all Nigerians” who, even in death, “will continue to inspire every generation to move forward with love, brotherhood and harmony.”

To former Vice President Atiku Abubakar, Joda’s death was the “fall of an Iroko”.

Abubakar in a personally signed statement described Joda as a great Nigerian and first generation of Adamawa indigenes who made immense contribution to growth of the state and the country.

“Today, our beautiful Adamawa State has lost a colossus. Indeed, an Iroko tree has fallen in Nigeria, particularly Northern Nigeria. The news of the death of Joda comes with some kind of a jolt even though he lived to a prime old age. He belonged to the first generation of Adamawa indigenes who put our state and the North in the map of modern Nigeria.

“His stature as an accomplished administrator was towering and colourful. He was a shining star in the galaxy of Nigeria’s public servants. Joda, with a few of his peers, wrote the rule book of Nigeria’s civil service and his footprints will remain indelible,” the former VP said.

Though Joda served in prominent public service position in the 70s, he would later return to serve as Chairman of the NCC Board for a decade during which period the nation moved astronomically from analogue to digital telecoms.

It was therefore of little wonder that the Executive Vice Chairman of the NCC, Prof. Umar Garba Danbatta, on behalf of the Board, Management and Staff of the Nigerian Communications Commission (NCC), reserved the nicest compliments for a man who gave his best to the nation.

Danbatta, himself a man of wide intellectual and professional bandwidth, described Joda as “a nation-builder, a consummate statesman, an administrator par excellence, a dedicated philanthropist, an egalitarian patriot, a fountain of inspiration, an honest and hardworking person during his lifetime.”

Danbatta recalled how Joda “led in setting the tone for the exponential growth in telecommunications service provision in Nigeria and Africa as a whole.

“Our thoughts and sympathy are with the entire family at this grieving period, while we pray for his soul to continue to rest in perfect peace. May the Almighty Allah grant him Jannatul firdaus and also give the entire family the fortitude to bear this irreparable loss,” he said in the letter of condolence.

Truly, the world is a stage. Ahmed Joda has done his bit, played his part. He, by his works and deeds, engraved his name in our hearts in petals of gold. Born in Yola in 1930, he exited in a blaze of glory on August 13, 2021 with 91 stars heralding him to the other realm. Not many men get the privilege of attaining the nonagenarian status.

Adieu to a ‘father, uncle, grandfather, friend, etcetera’ who once told this writer in 2005, at a chance meeting “you look as sharp as your writing,” a compliment since emblazoned in my heart.