The Accident Investigation Bureau (AIB) Nigeria says it has begun investigation into the  Air Peace Boeing 737-300 aircraft that had a burst tyre, while landing on Runway 18R , on Monday, in Lagos. 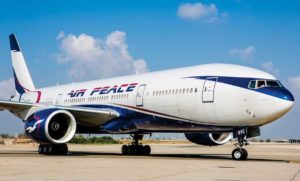 AIB’s General Manager, Public Affairs, Tunji Oketunbi, disclosed this in a statement issued on Wednesday, in Lagos.Oketunbi said the incident occurred as the plane was landing on Runway 18R on Monday, carrying 127 passengers and six crew members from Abuja Airport en route Lagos, but landed without causalities.

He said: “The Accident Investigation Bureau, Nigeria has been notified and commenced investigation into a serious incident.

“This incident involves a Boeing 737-300 with Nationality and Registration Marks 5N-BUQ operated by Air Peace Airline, which occurred around 9.31 p.m. (Local Time) on March 8, 2021.

“The aircraft, with 127 passengers and six crew members onboard, was en route Lagos from Abuja.

“The aircraft had a burst tyre on landing on Runway 18R of Murtala Muhammed International Airport, Ikeja, Lagos, and taxied to GAT to park. There was no injury or fatality.”

Oketunbi said that AIB required assistance of the public in the course of its investigation into the accident, explaining that it was open to receiving any video clips, relevant evidence, or information on the incident from any member of the public.

He added that the bureau would, however, appreciate respect for the privacy of the people involved, by both the public and the media, and not to assume the cause of the accident, until a formal report was released.

The general manager said, however, that the agency would soon release its preliminary report on the incident. (NAN)