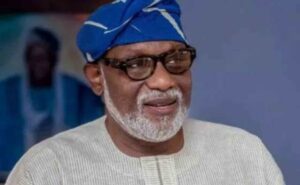 Akeredolu joins the list of high-profile Nigerians who had contracted the virus. Kaduna State governor, Nasir El Rufai was among governors but contracted the virus but survived it. Former Chief of Staff to President Muhammadu Buhari, Abba Kyari, died of Covod-19.

Akeredolu recently expressed deep sense of loss on the demise of Senator Abiola Ajimobi, saying his passing is a personal loss to him.

His Media aide, Ojo Oyewamide, said in a statement in Akure that Akeredolu was personally touched and felt the sense of great loss for many reasons.

Akeredolu recalls the memorable days of their shared communallity and brotherliness in the city of Ibadan prior to their venture into politics and whom he fondly referred to as Egbon.

The governor said that the demise of the former governor prods remarkable nostalgic moments.

According to the statement, twice, Akeredolu had cause to be Ajimobi’s Lead Counsel in defence of his gubernatorial mandate; and on both occasions, they savoured victorious moments.