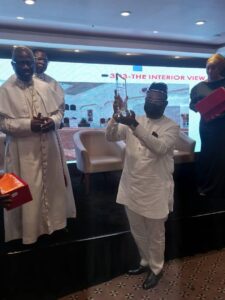 Sir Etekamba Umoren receives the award on behalf of Akpabio

He stated this at the Interfaith Roundtable On Building A Culture of Peace a d Unity in Our Country, organized by the Harvest Committee of Methodist Church Nigeria, Cathedral of Unity, Wuse Zone 3 Abuja.

“I am saying this publicly and I am not mincing words,  former governor Akpabio and the incumbent Minister of Niger Delta Affairs, left a very big shoe behind that is still very difficult to fill.”

The event was chaired by former Chief of Army Staff, Lt Gen. Azubuike Ihejirika, while the Emir of Bichi, Alhaji Nasir Ado Bayero was the Special Guest of Honour.

Also in attendance were representatives of the Senate President, Secretary to the Government of the Federation, Dr Charles Akpabio, Chief Don Etim among others.