Mr Orman Esin, the Akwa Ibom Commissioner for Culture and Tourism, has said the ‘Christmas Village’ generated more than N1 billion to the state economy since Dec. 1, 2020, working out to N1 billion in five weeks. 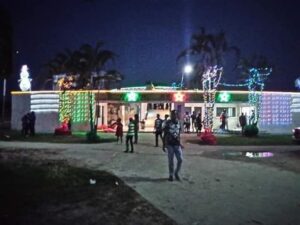 Esin announced this to newsmen in Uyo on Friday.

He said that the opening of the village had brought some life back to holidaymakers and citizens of the state.

“The Christmas village has created value of more than N1 billion since it was opened on Dec. 1, 2020,’’ he said.

“More than 600 vendors attract thousands of visitors every evening, adding that the Christmas village became a must-visit place in Nigeria every December.

“With the ravaging Covid19 pandemic and subsequent lockdown, the 2020 Christmas season looked bleak.

“Annual events were cancelled all over the world including the record-setting annual 999 events in Uyo,’’ Esin said.

The commissioner said that the Christmas village was set on a huge spread of land at the cultural centre, which allows for effective social distancing and respect for COVID-19 protocols.

He reiterated that the Christmas village was significant which shows that Akwa Ibom was ready for the business of tourism.

Esin explained that the village was the biggest Christmas event of its kind in Africa with the size of its location and potential for growth.

According to him, with lots of musical events, drama, games and outdoor catering, the village had kept the bustling spirit of the Yuletide very high in Uyo.

He said that the epochal event was a haven for entertainers of the state and others, to display their enormous talents to the world.

According to him, explained that the presence of health practitioners and security operatives was on ground to attend to health emergencies and ensure safety respectively.

Esin reassured that the organised structure enables pedestrian and vehicular movement within and around the business environment to avoid congestions and discomforts.

He said that the village was heightened by a plethora of recreational and sporting activities available for all age groups such that one would record no dull moment if they decide to stay all day. (NAN)