Amid his speech, EFCC boss, Bawa, slumps inside Presidential Villa 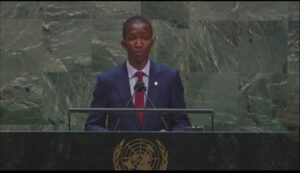 There was panic in Aso Rock as Chairman of the Economic and Financial Crimes Commission (EFCC), Abdulrasheed Bawa, on Thursday slumped at a programme in the Presidential Villa, Abuja.

While the audience wondered at his sudden change in countenance, he quickly offered explanation,  attributing his emotion to the death of a staff of the commission.

Moments later, he announced he could no longer continue with his speech and then walked off the stage, took his seat and slumped, his head hunching over his crumpled body.

Help came as he was immediately rushed out of the hall, accompanied by the Minister of Communications and Digital Economy, Professor Isa Pantami and his personal aides.

He was subsequently stabilized outside the venue.

EFCC officials said he showed no sign of illness or exhaustion prior to their coming into the Villa.