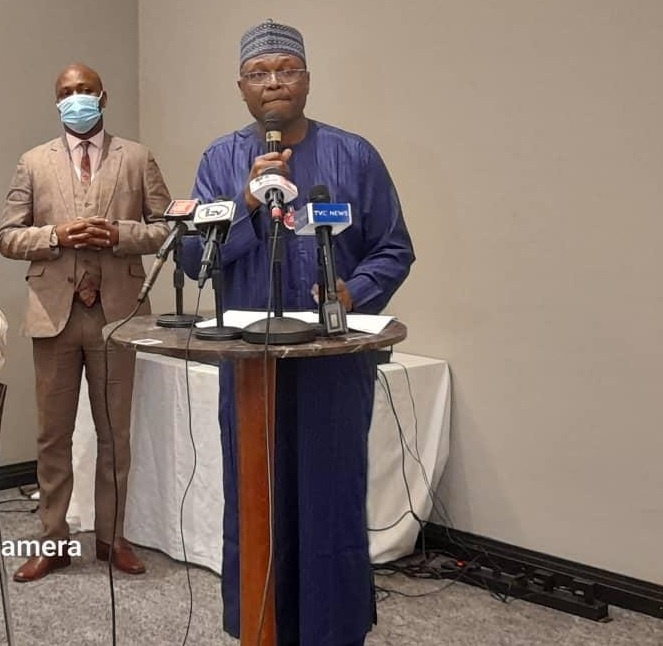 The Chairman of the Independent National Electoral Commission, INEC, Professor Mahmood Yakubu, has narrated how out of fear of insecurity, the commission had to escort 22 electoral officers from University of Calabar from Asaba airport to Anambra with 30 police personnel.

The INEC chairman who recounted the moments before, during and after Anambra November 6 governorship election, said the insecurity tension  was so high ahead of the election such that many earlier contracted transporters refused to offer services making movement of electoral officers and materials a herculean task.

“It got so bad that all the electoral officers we requested their services from the University of Calabar could not initially travel to Anambra as earlier scheduled because no transporter was willing to risk entry into Anambra with their vehicles and drivers.

“We weighed two options; fly them to Lagos then to Asaba or fly them to Abuja then to Asaba. Both options were not only expensive but almost impossible because getting flights out of Lagos or Abuja to Asaba on short notice for such number of persons was difficult.

“At the end I had to reach out to the Nigeria Airforce who graciously offered help and used their jet to fly them to Asaba airport and from the airport we had to deploy 30 cops to escort 22 electoral officials into Anambra in time enough for them to go through the last minute orientation and strategy sessions for the election,“ he told Online Publishers at an interactive meeting in Lagos, Wednesday.

Many Nigerians and international observers commended INEC for the bravery and courage to conduct the election which outcome had been generally acknowledged as reflective of the wishes of the people.

Professor Yakubu recalled that the election was held “under difficult circumstances.”

“The Commission has declared a winner and the certificate of return has been issued. The election was peaceful and the outcome of the election has been universally adjudged to be credible. However, the Commission is not unaware of the issues raised about the performance of the new technology deployed for voter accreditation. The deployment of the BVAS in the Anambra Governorship election was the second pilot test. It was intended to achieve two objectives.

“First is voter accreditation to replace the Smart Card Reader. The second is the uploading of polling unit result on the IReV portal to replace the z-pad. The BVAS performed optimally in uploading results on the IReV but there were the usual challenges associated with the pilot of a new technology in a major election.

“From our assessment so far, much of the glitches encountered on Election Day in Anambra State had little to do with the machines but more with the operators of the system. The extraordinarily difficult circumstances under which the election was held meant that some of the better trained ad hoc staff withdrew at the 11th hour. Similarly, some critical service providers such as vehicle owners also withdrew thereby severely affecting our plans for rapid response by our technicians – the Registration Area Technical (RATECH) staff.

“Suffice it to say that in spite of the glitches, BVAS has justified our determination to deepen the deployment of technology in the electoral process. Given the credible conclusion of the election, it has strengthened our belief that even the minimal introduction of technology in voter accreditation is better than the best manual process. We want to thank the voters in Anambra State for their patience and faith in the new technology. This has also justified the hope of citizens across the country that the deployment of more appropriate technology is essential to electoral integrity in Nigeria,” he said.

He reassured Nigerians that INEC has learnt vital lessons from the Anambra pilot scheme, adding that  “there will be remarkable improvement in the next major election which is the end-of-tenure Area Council election in the Federal Capital Territory (FCT) schedule to hold in three months on 12th February 2022.”