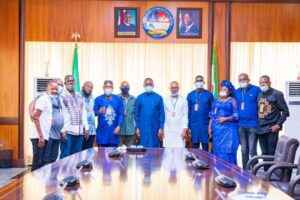 The governor expressed the displeasure with the development when he received the Youths of Ndokwa nation in the state led by their President-General, Comrade Anslem Nzete, at Government House, Asaba.

He said that he was disappointed in some of the companies for failing to partner the government to develop host communities in spite of the peace in the communities.

According to Okowa, apart from Energia that has an MOU and has been doing a few things that I have been seeing, the others can hardly keep to their MOU, and it’s not fair.

He assured that he would put pressure on the firms to look into the issue of Okpai road and other infrastructural matters in the area, saying “if we have taken the bridge project which is a major aspect, from them, they should be able to show signs of partnership to take up some other actions.

“If they fail to, then we will also know what to do to put them under pressure,” he said.

On marginal oil fields, the governor stated that no stone would be left unturned in ensuring that the people were not short-changed in the process, adding that the state government had written to the Department of Petroleum Resources (DPR) to provide it with the current oil quantum of the state, and was awaiting response.

“We know that the current quantum cannot be what it used to be 10 years ago. So, it’s important that we take note of that. I think that the various changes they have been making in the DPR have led to the reason why they have not responded to us,” he said.

(NDDC) board in spite of the area being oil-producing, and promised that the matter would be addressed adding that he has taken note of it.

“I am aware that no son of Ndokwa has been appointed into the NDDC board and I have taken note of that, but there are too many things wrong with the NDDC at the moment. And, that’s why you can now have an Interim Management Committee running the place for such a long time,” he stated.

He reaffirmed that state government’s commitment to full establishment of Kwale Industrial Park in spite of the challenges posed by COVID-19, adding that the state had approved funds to pay compensation for the land.

“Although we have been slowed down totally by COVID-19 and I hope we are able to get out of the current moment, we are going to take some initial steps on our own and the first thing we are trying to do now is to quickly see how we can settle by paying compensation for the land acquired which process is to start very soon.

“I’m sure that as much as possible we will try to deal with all of that before the end of December; so that we can progress to the next stage in 2021.

On the Umusadege/Benekuku dispute, Okowa said that the state government was studying the court judgement on the matter.

He commended the youths for their peaceful disposition towards issues affecting, and assured that some of the matters canvassed by them would be given prompt attention.

Earlier, the leader of the delegation, Nzete, had urged the governor to prevail on the oil companies operating in their area to stop using divide-and-rule tactics to marginalise host communities.

He said that Okpai community had no road in spite of being host to several oil facilities, including a gas plant.

Nzete warned that the peaceful disposition of Ndokwa youths should not be taken for cowardice.

Executive Assistant to the Governor on Youth Development, Mr Nnamdi Ezechi, who was among the delegation,expressed appreciation to the governor for granting audience to the delegation, pointing out that it was the first time since 1999 that the Ndokwa Youths had an audience with a governor of the state.