APC under pressure to split as internal cracks widen 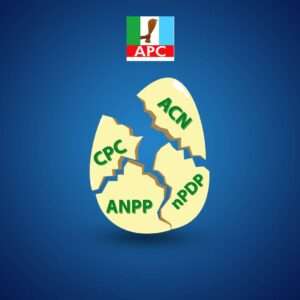 Despite public rebuttals, there appears huge cracks within the ruling All Progressives Congress, APC, as its foundation power cells are beginning to find more reasons for a divorce. APC was formed by a merger of four main parties: the Action Congress of Nigeria, ACN, led by Asiwaju Bola Tinubu; the All Nigeria Peoples Party, ANPP, the Congress for Progressive Change led by President Muhammadu Buhari and a splinter group from APGA.

The loose coalition was later joined by a splinter group (nPDP) from the then ruling Peoples Democratic Party, PDP, led by current Minister of Transportation, Rotimi Amaechi. The sole aim of the group was to unseat the PDP government of Dr Goodluck Jonathan, which lost its steam in good governance just months to the 2015 general elections.

Jonathan was reduced to an inept and incompetent president with near total collapse of infrastructure including electricity where the Jonathan administration made a very strong showing in the days of Prof. Barth Nnaji as Minister of Power. The dark clouds of corruption also dealt a deadly blow to the leadership of Jonathan. Plus, he had a weak media team which was at best incoherent and could not match the carefully choreographed media blitz from the opposition.

It was therefore easy for APC to convince the Nigerian populace with their Change mantra, promising to turn the screw. But only just in five years, APC seemed to have worsened the situation for Nigerians. The APC government under Buhari has created a bigger oasis of poverty in Nigeria than any other government. It has mismanaged the economy, divided the people along strong ethnic lines and generally brought more pains on the people. Corruption still thrives in the most brazen manner.

Some insiders in the party had been honest enough to admit they failed Nigerians after making lofty promises, but there are diehards who have refused to pander to any opinion that short-sells the party in the eyes of the public even when the indices are glaring.

However, APC is up against a bigger challenge of restoring public confidence in its leadership. It’s the challenge of still staying as one family. There are strong agitations within the party. The founding blocks are not happy with the CPC cell which they accused of cornering and controlling the lever of power in the party. The recent wrangling that led to the dissolution of the National Working Committee and the sacking of Adams Oshiomhole only helped to accentuate the silent war within.

The Oshiomhole camp in the ACN is subtly working and pushing for the installation of Tinubu as the 2023 presidential flagbearer of the APC. This has angered the zealots within the CPC who insist that Buhari must play a huge role in who succeeds him. This group spearheaded by Nasir el-Rufai, the governor of Kaduna State and few members of the cabal in the Presidency with support from some governors across the nation is seriously working against the candidacy of Tinubu. They are disposed to a much younger person from either the South West or the North. The option of another Northern candidate after Buhari seems a hard sell and this has prompted the group to shop in the South West.

Strangely, the group is not looking in the direction of the south east for what insiders describe as poor representation of the party in the zone. The south east is predominantly pro-PDP. Sadly, as one of the Northern governors pushing for this agenda put it, the South East, which has never produced a president since 1999 and the south-south are not under consideration by the group. The boldness of the CPC group is said to have infuriated members of the other groups especially the ACN group which has ahead of time settled for Tinubu. Though Tinubu denied recently that he has not announced his presidential ambition, APC insiders faulted his claim, saying he has been consulting and building liaisons with different interests within the party.

But there are some young Turks within the ACN who do not want a Tinubu candidacy and they are aligning with some northern interests to botch the Tinubu ambition. Ekiti State governor, Kayode Fayemi who has become a vested interest in the 2023 zero hour with the plum promise of becoming a vice presidential candidate to another younger northerner is also spearheading a bull fight with some contending factors in the south west.

The implication of the power show between the CPC elements and their ACN counterparts means that factions that came from the ANPP and the new PDP, nPDP, have been left in the lurch. They too are planning to pull out of the APC should Tinubu and his faithful make good their threat of ditching the APC.

A worst case scenario, says an ACN member who analysed the unfolding events, is that Atiku Abubakar, a cross between the PDP and the APC, would be drafted into the breakaway fight with CPC. The group said a huge chunk of the ACN members would be willing to align with Atiku group to form a new party. According to him, the prospect of a new party is very plausible and “it is going to have many people joining from all the existing political parties.” He said the mega party would bury both APC and PDP ahead of 2023.