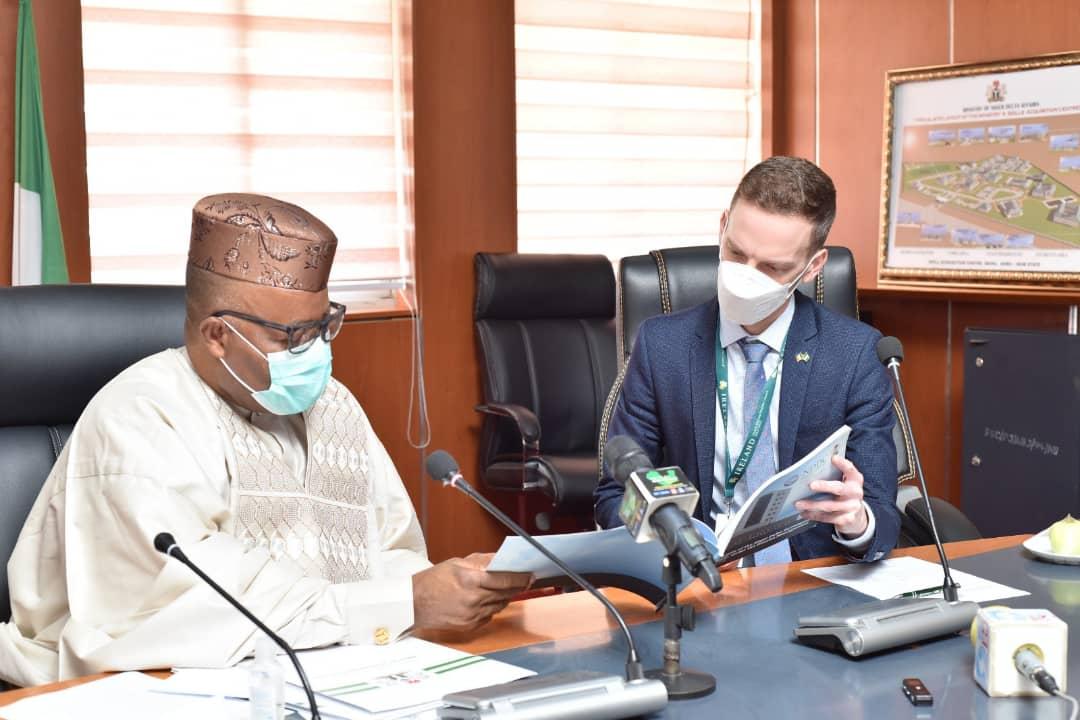 We will no more encourage the moving of individual’s pockets forward, but we will now insist on moving development and empowerment of the people forward

Minister, Niger Delta Affairs Ministry, Senator Godswill Akpabio, has noted that arrogance on the part of oil companies and absence of Corporate Social Responsibility led to militancy in the Niger Delta Region.

He also reiterated the commitment of the President Muhammadu Buhari- led administration to changing the negative narrative in the region.

Akpabio said this while receiving in courtesy, the Charge d’ Affaires of the Embassy of Ireland in Nigeria, Mr Conor Finn, in his office in Abuja on Thursday.

According to Akpabio, “arrogance and absence of Corporate Social Responsibility by oil operators in the region, which caused the indigenes their source of livelihood, led to militancy in the region.

It was a situation where the owners of the land ate crumbs that fell off the table of the investors, while the investors lived in opulence with no regard or concern for the living condition of the host community.”

“Oil spillage caused serious economic hardship to the people of the Niger Delta, whose major source of income are fishing and farming.

As a result of this unbearable condition of the host community, President Buhari is more than determined to change the negative narrative for the good of the people, through the implementation of the recommendations by the Forensic Auditors”, he said.

He noted that the government at the centre,” Is ready to listen to the demands of the people on the constitution of the board of the Niger Delta Development Commission (NDDC).

Things are certainly not going to remain the same again.

We will no more encourage the moving of individual’s pockets forward, but we will now insist on moving development and empowerment of the people forward.

The first and second sets of the Forensic Audit reports have already been submitted and we are awaiting the final report which would form the basis for the take off of the new board”.

Akpabio, who described his visitor as a man with passion for the people of the Niger Delta Region, thanked him for the interest of the Irish government in the affairs of the people and assured him of the readiness of the Ministry to partner SACA to touch those who actually needed to be touched in the region.”

Speaking further, Akpabio called for a change of attitude from the people of the region by insisting on provision of sustainable infrastructural projects as source of livelihood, instead of engaging in militancy.

“Oil companies and the attitude of our people are also the problem of the region.”

“The NDDC, as an interventionist agency was over the years turned into an avenue to finance political ambition of some politicians, while neglecting the core mandate of alleviating the sufferings of the people.”, he stressed.

In his remarks, Finn reaffirmed the determination of the government of Ireland to partner with the Niger Delta Ministry for continuous peace and development in the region, he lauded Akpabio in his efforts at nipping in the bud, the activities of militants, through empowerment  of the youths and provision of infrastructure.

“Let me reiterate our readiness to make ourselves available in support of the programs of the Ministry.

We hope to see more effort towards alleviating the suffering of the people in the days to come.”, he assured.

In his contribution, Rev Father Kelvin O’ Hara, an Irish, a recipient of the Presidential Distinguished Service Award For the Irish Abroad for Peace, Reconciliation Development in Nigeria, who accompanied the ambassador said, ” I feel at home in the Ministry of Niger Delta Affairs than any other.

My interest in the region dated back to 1990.

The neglect of the area and oil spillage have over years, caused the death of several children, while investors are more interested in their profit and care less about the plight of their host community.

I have great hopes in the Minister because of what he did in Akwa Ibom State when he was governor.

It is a huge responsibility on the Minister and the Ministry and that is why we have to support the Ministry to assist the youths with a permanent source of livelihood and survival”.