African economies are at a pivotal juncture. The COVID-19 pandemic has brought economic activity to a standstill. Africa’s hard-won economic gains of the last two decades, critical in improving living standards, could be reversed.

High public debt levels and the uncertain outlook for international aid limit the scope for growth through large public investment programs. The private sector will have to play more of a role in economic development if countries are to enjoy a strong recovery and avoid economic stagnation. Heads of state from Africa made this one of their resounding messages during the recent summit on “Financing African Economies” held in Paris in May.

Infrastructure—both physical (roads, electricity) and social (health, education)—is one area where the private sector could be more involved. Africa’s infrastructure development needs are huge—in the order of 20 percent of GDP on average by the end of the decade. How can this be financed? All else equal, the main source of financing would be more tax revenue collections, something that most countries are working towards. But, given the scale of the needs, new financing sources will have to be mobilized from the international community and the private sector.

Africa is a continent that holds immense opportunity for private investors. It has a young and growing population and abundant natural resources. Cities are seeing massive growth. Many countries have launched long-term industrialization and digitalization initiatives. But significant investment and innovation are necessary to unlock the region’s full potential. Recent research published by IMF staff shows that the private sector could, by the end of the decade, bring additional annual financing equivalent to 3 percent of sub-Saharan Africa’s GDP for physical and social infrastructure. This represents about $50 billion per year (using 2020 GDP) and almost a quarter of the average private investment ratio in the region (currently 13 percent of GDP).

At the moment, the private sector is not involved much in financing and delivering infrastructure in Africa, compared to other regions. Public entities, such as national governments and state-owned enterprises, carry out 95 percent of infrastructure projects. The volume of infrastructure projects with private sector participation has significantly declined in the past decade, following the commodity price bust. The limited role of private investors is also apparent from an international comparison perspective: Africa attracts only 2 percent of global flows of foreign direct investment. And when investment does go to Africa, it is predominantly to natural resources and extractive industries, not health, roads, or water.

Investment in infrastructure in Sub-Saharan Africa

Project risk. Despite Africa presenting a wealth of business opportunities, the pipeline of projects that are truly “investment-ready” remains limited. These are projects sufficiently developed to appeal to investors that do not want to invest in early-stage concepts or unfamiliar markets. Financial and technical support by donors and development banks can help countries fund feasibility studies, project design and other preparatory activities that expand the pool of bankable projects. 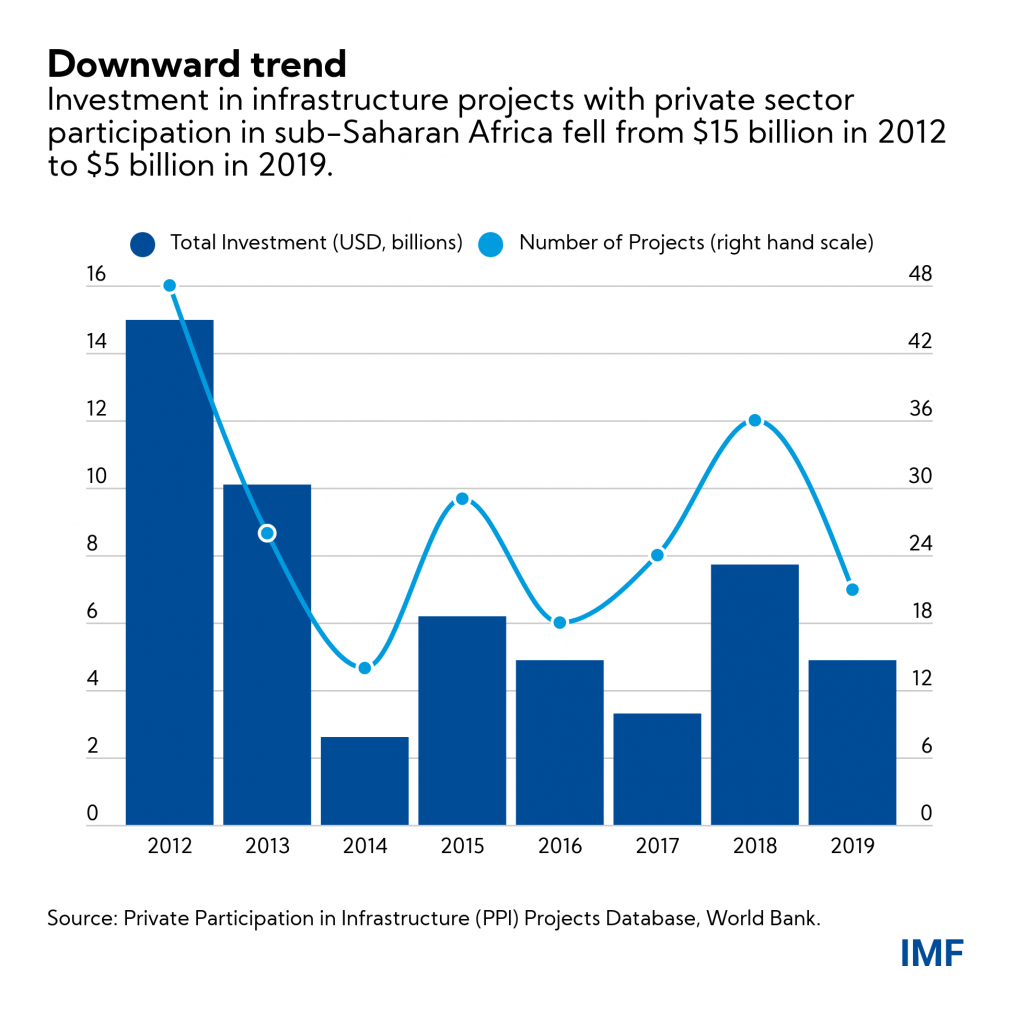 Imagine that a project yields a return of 10 percent a year, but the currency depreciates by 5 percent at the same time—this would eliminate half of the profits for foreign investors. No wonder currency risk is a top concern for them. Prudent macroeconomic policy combined with sound foreign exchange reserve management can greatly reduce currency volatility.

No investor will enter a country if they don’t have assurances that they can also exit by selling their stakes in a project and recouping their gains. Narrow and underdeveloped financial markets may prevent investors from exiting by issuing shares. Capital controls can slow down or increase the cost of exiting. And, when the legal framework is weak, investors may get bogged down in legal battles to have their rights recognized.

Improving the business climate is important but not enough. Development sectors have certain structural features that make private sector participation intrinsically complicated, even in the most favorable environments. For instance, infrastructure projects often have large upfront costs, but their returns accrue over long periods of time, which can be difficult for private investors to assess. Private sector growth also thrives on networks and value chains, which may not yet exist in new markets.

When these problems are acute, governments may have to provide extra incentives to make infrastructure projects attractive to private investors. These incentives, which comprise various types of subsidies and guarantees, can be costly and carry fiscal risks. But the truth is, many projects in development sectors won’t happen without them. In East Asia, 90 percent of infrastructure projects with private participation receive government support.

With certain design features, governments can maximize the efficiency and impact of public incentives, while minimizing risks. Support should be targeted, temporary, and granted on the basis of proven market dysfunctions.

It should also be transparent, leave sufficient risk to private parties, and display additionality, meaning that incentives should make worthy projects happen that would not happen otherwise. Finally, their size should be well calibrated to avoid overcompensating the private sector.

Given the limited availability of public funds, African countries and development partners could consider reallocating some resources used for public investment towards financing public incentives for private projects. When this reallocation is gradual and supported by sound institutions, transparency and governance, it could increase the amount, range, and quality of services for people in Africa. More innovative thinking can help realize the transformative potential of infrastructure on the continent.