Bad weather conditions became a kill joy for hundreds of persons including four governors who got stranded at Nnamdi Azikiwe International Airport in Abuja on their way to Kano to attend the 12th Asiwaju Bola Ahmed Tinubu Colloquium. 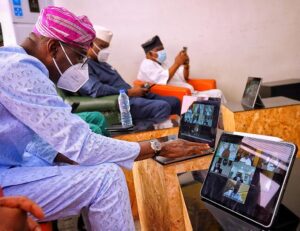 Governor Sanwo-Olu and others attend Tinubu Colloquium virtually from airport

The Colloquium to mark the 69th birthday of Bola Ahmed Tinubu, a chieftain of the ruling All Progressives Congress, APC, was hosted by the Kano governor, Abdullahi Ganduje.

The four governors who were forced to participate at the Colloquium virtually from their laptops, phones and pads were Babajide Sanwo-Olu of Lagos, Gboyega Oyetola of Osun, Dapo Abiodun of Ogun and Dr. Kayode Fayemi of Ekiti.

Sanwo-Olu wrote on his Facebook page: “Due to poor weather conditions, we could not make it to Kano State to join other Nigerians at the 12th Bola Tinubu Colloquium today.

The Lagos governor had earlier sent out a birthday message to Tinubu, eologising him as a statesman and pathfinder.

He wrote: “Hearty congratulations to our great leader, Asiwaju Bola Ahmed Tinubu on the joyous occasion of his 69th birthday.  Asiwaju is a statesman and builder whose contribution to a progressive and democratic Nigeria cannot be quantified.

“As a pathfinder, Asiwaju charted the developmental trajectory of modern Lagos, raising the bar of governance and public service in Nigeria.

“As he marches forward on to a higher pedestal, may the Almighty go with him every step of the way.

“On behalf of my wife, the government and the good people of Lagos, I wish Asiwaju Bola Tinubu many happy returns in good health.”