Bank Wars is expected to run for five Saturdays until June 5, 2021, with winners of the FIFA 21 Gaming competition expected to smile home with some mouth-watering prizes, courtesy of Samsung.

Action in the augural edition of Bank Wars, a FIFA 21 Gaming competition for leading Nigerian banks, got underway in Group B on Saturday, May 15, 2021 as Sterling Bank and Fidelity thrashed rivals, Union Bank, to take charge of proceedings in the group. 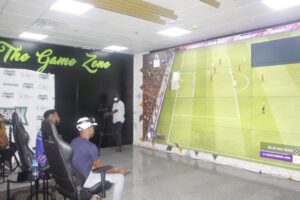 Meanwhile, the second game between Fidelity Bank and Guaranty Trust Bank (GTB) did not hold, as GTB failed to show up, thereby resulting in a walkover, with three points and three goals awarded to Fidelity. Same applied to Sterling Bank who were expected to play GTB in the day’s third game.

Nevertheless, action returned to the screen for eager fans in the final game of the day, as Fidelity Bank pipped Union Bank 3-2, with Nathan Goodluck, a Media Executive, running the show for the victorious side.

The day’s proceedings ended with Fidelity and Sterling Bank occupying the joint top position in Group B, with six points apiece. However, Sterling Bank have a better goal difference, making them outright group leaders. Union Bank, which lost its first two matches and GTB, which failed to show up for their encounters, occupy the third and final position respectively.

A few attendees at the event suggested that GTB may have been worried by the potential fire-power of the other teams in the group, thereby opting to beat a tactical retreat in order to avoid heavy defeats.

Earlier, Bank Wars had kicked off on Saturday, May 8 with goals-filled matches featuring the teams in Group A.

Access Bank got the ball rolling on the day with a 7-2 drubbing of First City Monument Bank (FCMB). In the second game, Standard Chartered Bank pipped Zenith Bank 4-3. Taking to the FIFA 21 pitch in the third match in Group A, Access Bank cemented its place as one of the early favourites with an impressive 11-2 thrashing of Zenith Bank, while FCMB made up for its initial loss to Access Bank by beating Standard Chartered Bank 7-4.

The final round of group matches is scheduled for Saturday, May 22, 2021.

Access Bank which occupies the leadership position in Group A with six points, will be looking to confirm its place in the semi-finals as group leaders, as it takes on Standard Chartered Bank in the day’s first game by 1pm. Standard Chartered are third on three points and a win may see them draw level with Access Bank. In the day’s second game, fellow Group A contenders, First City Monument Bank (FCMB) will trade tackles with bottom side, Zenith Bank by 1:30pm. A win for FCMB, who are second with three points, will also likely take them to the top of the group and on the verge of qualification, depending on how the first match pans out.

Also, hostilities in Group B will come to a head on Saturday in a top-of-the-table clash between Sterling Bank and Fidelity Bank. Both sides have six points and excitement is bound to hit fever-pitch in what is potentially a winner takes all tie, with the victors guaranteed a place in the semi-finals. The match kicks off by 2pm. In the day’s final game, GTB will face off against Union Bank, with both sides looking to preserve their dignity after failing to record any points on the board so far.

Bank Wars is expected to run for five Saturdays until June 5, 2021, with winners of the FIFA 21 Gaming competition expected to smile home with some mouth-watering prizes, courtesy of Samsung.

A Samsung 55-inch TV awaits the first prize winner while the runner-up will go home with a massive Samsung Refrigerator. Also, the third best team will claim a Samsung Washing Machine. In addition, there are prizes for individual representatives of the competing teams while the best goal of the competition (to be determined by votes) will fetch the scorer a Samsung 49-inch TV.