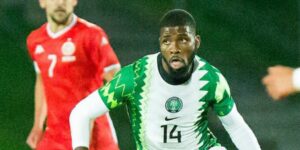 Nigeria’s Super Eagles beat the Pharaohs of Egypt 1-0, courtesy of a Kelechi Iheanacho 30th minute goal, in their opening Group D match in Garoua at 2021 AFCON in Cameroon.

But Coach Austin Eguavoen despite the victory against one of the tournament favourites, said they will not undermine any team. He said they will treat every match as a final until their mission is achieved.

Simon had a hand in Iheanacho’s goal as his cross was headed by an Egyptian player towards Nigeria Joe’ Aribo who nodded calmly to the path of Iheanaco. The Leicester striker touched the ball once before planting a curling shot beyond the Egyptian goalie.

Ex-Nigeria international and one who played football like pure art, Austin Okocha, gave the Man of the Match diadem to Moses Simon whom he described as the tormentor-in-chief of the Egyptians. Okocha featured as analyst on Super Sport