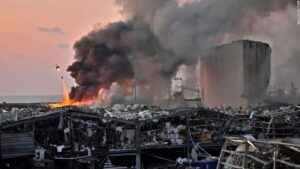 When an explosion from ammonium nitrate at the port store tore through the Lebanese capital on Tuesday afternoon, it wreaked havoc on nearly all of Beirut’s quarters.

Buildings as far away as 10 kilometers from the site of the explosion were damaged. Shards of glass filled the thoroughfares, and street lights were extinguished by its force. The blast registered as a 3.3 magnitude earthquake, the U.S. Geological Survey said.

At least 78 people were killed and more than 4,000 wounded, the health minister told Reuters, and the city’s residents rushed to hospitals to donate blood.

“I was on the veranda when the entire neighborhood shook left and right,” Bane Fakih, a filmmaker who lives on the western tip of the city, told CNN. “It was very intense. I’ve never felt fear like this.”

Sirens screamed as ambulances rushed to collect the injured, many of whom were climbing out of the rubble of their homes.

The blast at Beirut’s port formed a mushroom cloud and could be heard in the city’s furthest outskirts. A giant red cloud hung over the capital as the city’s residents — around 4 million people — began to uncover the scale of the damage to their houses, sought treatment for their wounds and frantically called their loved ones to see if they were safe.

“Beirut port is totally destroyed,” eyewitness Bachar Ghattas told CNN, describing the unfolding scene as something akin to “an apocalypse.”

“It is very, very frightening what is happening right now and people are freaking out,” he said. “The emergency services are overwhelmed.”

There were conflicting reports on what caused the explosion, which was initially blamed on a major fire at a warehouse for firecrackers near the port. The director of the general security directorate later said the blast was caused by confiscated “high explosive materials,” but did not provide further details.

CNN’s Ben Wedeman reported that authorities think a large amount of ammonium nitrate seized from a ship in 2013 or 2014 may have caused the blast.

The harrowing scenes come after nearly a year of economic and political turmoil that has plunged Lebanon into uncertainty and, according to many experts, brought it to the brink of collapse. Poverty soared to over 50% and scenes of people scavenging garbage dumps for basic necessities have become commonplace.

Young people who just months ago staged a popular uprising against the country’s political class, widely accused of corruption, desperately searched for a silver lining.

“I’ve never seen Beirut like this before. Beirut today looks like our hearts,” said activist Maya Ammar. “We have nothing left. Just when we thought it couldn’t get worse, it did.”

“My family and my loved ones are asking me to go back home because they don’t want me to breathe any toxins … but I can’t go back home. I have friends who have lost their homes,” she added. “Their homes were completely destroyed. I have to go and help them.”