Local News
Home›Local News›Boma and I acted a film; my husband will understand – Evicted Tega

Boma and I acted a film; my husband will understand – Evicted Tega 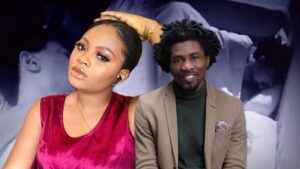 BBNaija Season 6, Shine Ya Eye, witnessed four evictions Sunday night with lovebird Tega, a married woman,  rationalizing her obvious romance with another evictee, Boma, saying they are both actors and they acted a film for viewers. Then, she added a clincher: I hope you guys enjoyed it?

She was responding to questions posed to her by anchor, Ebuka Obi-Uchendu, on her love tango with Boma in the house, the videos of which went viral. The two other evicted housemates were Peace and Michael.

Viewers of the famous television reality show, Big Brother Naija, Season 6, Shine Ya Eye edition, were pleasantly surprised to witness massive eviction of housemates on Sunday, the highest number of evictions since the show began.

Just 24 hours before the eviction night, Big Brother, the host of the show hinted through the official Facebook page of the show that there would be king size eviction.

From the collated vote percentage displayed after the eviction, Tega was seen to have garnered 0.67 per cent, Peace had 0.81 per cent, Boma got 0.96per cent while Michael had 1.62 per cent.