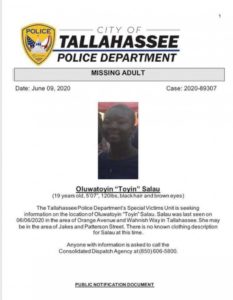 Her death is being investigated as homicide and the case has been turned over to the department’s Violent Crime Unit, police said.

Authorities have identified a suspect in the case, Aaron Glee Jr., 49, who was brought into custody over the weekend following the discovery of the victim, police said. Glee has not been charged in connection to the disappearance.

A Tallahassee Police Department spokesperson said any formal charges will be announced at the conclusion of the investigation.

Salau was last seen on June 6, according to police. Her body was found about 3 miles from where she was last reportedly seen.

The teen was active in the city’s Black Lives Matter protests against police brutality, calling for justice for black people recently killed at the hands of police, including Tony McDade of Tallahassee and George Floyd of Minneapolis.

The grassroots organization Tallahassee Community Action Committee had held search parties for Salau, whom they described as a local activist, after she was reported missing on June 9.

The same day she was last reportedly seen, Salau had shared details of an alleged sexual assault on Twitter, according to Tallahassee ABC affiliate WTXL. Police could not confirm to ABC News if the account was Salau’s. She tweeted that a man molested her that morning around Park Avenue and Richview Road, Tallahassee, Florida.

She said the man offered to give her a ride back to a church where she had sought “refuge” because of “unjust living conditions”.

“He came disguised as a man of God and ended up picking me up from nearby Saxon Street,” she tweeted. “I trusted the Holy Spirit to keep me safe.”

As news of Salau’s death spread, mourners were tweeting the hashtag “Justice for Toyin.”

Meanwhile, Mrs Abike Dabiri-Erewa, the Chairman/CEO, Nigerians in Diaspora Commission (NiDCOM), on Monday called on the government of the United States to ensure a thorough investigation in the alleged killing of a Nigerian, Toyin Salau.

She described the alleged murder of the 19-year-old Nigerian-American Activist, Salau in the U.S as highly depressing and cruel.

This is contained in a statement signed by Mr Abdur-Rahman Balogun, Head of Media and Public Relations Unit of NiDCOM.

Dabiri-Erewa said the U.S government must conduct a thorough investigation on the circumstances leading to Ms Salau’s death.

The NIDCOM boss condoled with the immediate family of Ms Salau who died while advocating against oppression and injustice.