Buhari in another crucial security meeting with Governors, Security Chiefs 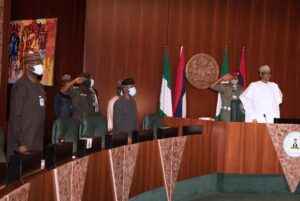 President Muhammadu Buhari is currently in a virtual meeting with members of the Governors Forum’s Security Committee, headed by Gov. Yahaya Bello of Kogi over security developments in some parts of the country.

The meeting is being attended by Vice-President Yemi Osinbajo; Secretary to the Government of the Federation, Boss Mustapha and Chief of Staff to the President, Prof. Ibrahim Gambari.

President Buhari had on Monday met with five governors from the North East where he reassured that security would be restored to the area and the nation at large.

He said that his administration was adopting new strategies, following the acquisition of modern military equipment.

The Monday’s security meeting with the North-East State governors was also attended by Vice President Yemi Osinbajo, the Chief of Defence Staff, Service Chiefs, the Inspector-General of Police and the heads of intelligence agencies. (NAN)

Politicians are the chief cause of insecurity ...