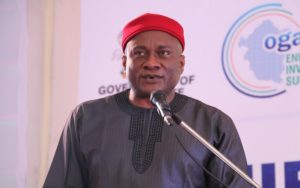 Chief Executive Officer of Air Peace Airlines, Allen Onyema has dispelled the notion that President Muhammadu Buhari does not like Igbo people, describing it untrue.

He spoke in an interview ABS television in Anambra State where he profusely dismissed the insinuation of bitterness and marginalization towards Igbo by Buhari. Rather, the aviation chief thanked God for the emergence of President Buhari at this time. He said under the Buhari government, he has enjoyed massive benefits even as an Igbo man.

He said: “I thank God for our president, President Muhammadu Buhari. It is very untrue that he does not like the Igbos. I’m a beneficiary, without being a member of his party or any party, of his support for indigenous businesses but people don’t know, people believe what they read out there.

“The Federal Government of Nigeria has given me destinations they have not given anybody yet I’m an Igbo man. I’m from Anambra, I don’t know anybody, I don’t have any Godfather.

“The government has given me 20 destinations to fly to. I’m an Igbo man. It’s not true that President Buhari does not like Igbos.”

Some agreement reached, negotiations to continue as ...

News or Advert? Let talks
Start a Conversation
Hi! Click one of our team member below to chat on Whatsapp
The team typically replies in a few minutes.
Call/SMS: 08056801124
info@politicaleconomistng.com
I will be back in 4:16