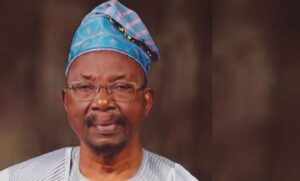 President Muhammadu Buhari has condoled with the family of the late Sen. Olabiyi Durojaiye, describing the passing of the elder statesman as a great loss to the nation.

Durojaiye, former Chairman of the Board of the Nigerian Communications Commission, NCC, former Director at Central Bank of Nigeria, CBN, and a chieftain of the All Progressive Congress died at 88.

In a condolence message by his spokesman, Mr Femi Adesina, on Tuesday in Abuja, the president also commiserated with the government and people of Ogun, as well as friends and political associates of the elder statesman.

President Buhari said the deceased was “a dogged fighter for democracy, an activist, a nationalist and an indispensable member of the financial community.”

He noted that Durojaiye’s imprints were always visible where he worked as a director of the Central Bank of Nigeria, at the Mint, and as Chairman of Nigerian Communications Commission.

According to the president, the late Durojaiye remained an epitome of professionalism, integrity, kindness and humility.

President Buhari believed that Durojaiye’s commitment to democratic ideals was never in doubt.

The president recalled the prominent roles he played as a member of NADECO in fighting for justice towards the actualisation of the memorable June 12 election.

While praying for the repose of the soul of the departed, Buhari urged the family to take solace in the fact that their patriarch lived a life of inspiration and impacted positively on the community and national landscapes.