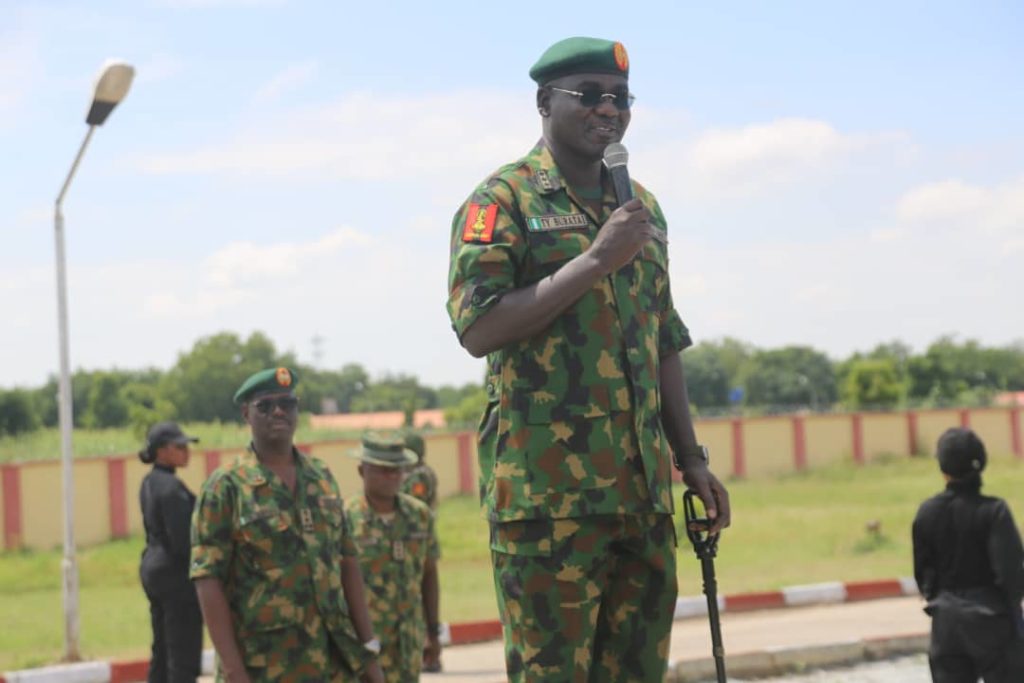 Buratai said the visit was part of his effort to encourage the personnel who were wounded while fighting in various theatres of operation in the North East and North West.

He said his decision to visit the wounded troops was borne out of the recognition of their efforts in tackling the menace of insurgency and in defence of their fatherland.

He added that the troops had also exhibited true spirit of professional soldiers, adding that they had made great impact in the defence of their country.

Buratai also stated that welfare of personnel both on the field and barracks remained paramount to the Nigerian army under his leadership, assuring that all issues affecting their welfare and wellbeing would be addressed.

He also assured the soldiers that all cases requiring special attention outside the country would be properly taken care of.

He promised that efforts would be made to provide the necessary equipment for the hospital to be able to handle all cases locally.

According to him, Nigerian army has established and upgraded reference hospitals across the various geo-political zones to meet the medical needs of its troops undertaking operations across the country.

“I am very happy to see you having met some of you on the field and due to your courage, determination and loyalty, you were there ready to sacrifice and you were wounded but you are here in very high mood.

“This is a true spirit of a gallant and professional soldier and I am very proud of you all.

“I am very happy that you made the impact that several of our colleagues and indeed Nigerians are now living in peace though relative but I assure you that it is much more better now than it was five or four years back.

“I have been thoroughly briefed on some of your challenges especially about the follow up treatment of some of you abroad as well as the need for recreational facilities here.

“I assure you that all these will be addressed very soon,” he said.

The COAS also promised to arrange special programmes for the recuperating troops in form of skill acquisition while recuperating until they are fit to rejoin active military operations.

He assured them that the fight against terrorism and banditry in parts of the country were being carried out effectively.

He also assured the troops that new equipment and platforms had been procured for the war against insurgency and banditry in order to effectively tackle the challenges.

Earlier, the Acting Medical Director of the Hospital, Col. P.O Aburume, expressed appreciation for the visit, saying it was a morale and confidence booster for the soldiers.

Also, one of the wounded soldiers, Maj. D.M Dede, thanked the Chief of Army Staff for the gesture, saying the visit was morale booster for them to recover and return to the war front to complete their mission.

Dede also commended the hospital for the adequate attention being given them, adding that the hospital was well equipped to meet their health needs.

“You have served them food like this in the front line and because of your exemplary leadership, you still followed us here to be with us and we appreciate this,” he said.

Similarly, Isah Yahaya, a Warrant Officer, said he could not wait to fully recover and return to the battle front to complete the task of eliminating the Boko haram terrorists.

While commending the commitment of Buratai to their welfare, Yahaya called on him to look into his promotion that was not granted him and other colleagues.

According to him, our welfare is well catered for here and the medical care is 100 per cent and we are very happy to see you here.

“I am very much ready to go back to the mission area and fight the terrorists,” he said. NAN

Supporting Obaseki was a mistake, I apologise ...