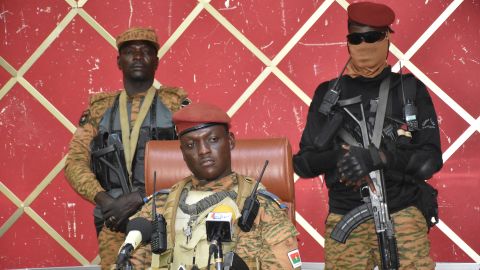 The comments followed a meeting with an ECOWAS delegation sent to meet the junta that took power last week in the second coup to hit the West African country this year.

Traore said Burkina Faso would “respect the dynamic compromise” agreed with ECOWAS in July to restore constitutional order in 24 months.

He also said the country would honour its international commitments, particularly regarding the protection of human rights, and would collaborate with ECOWAS evaluation mechanisms.

The ECOWAS mediator that headed the delegation, former Niger president Mahamadou Issoufou, on Tuesday said he was satisfied with the exchanges.

Traore led the coup that ousted military leader Paul-Henri Damiba, who had seized power in a previous coup in January and promised ECOWAS to restore civilian rule by July 2024.

Both takeovers were spurred by frustrations over growing insecurity caused by a rampant Islamist insurgency that began in neighbouring Mali in 2012 and spread to other countries south of the Sahara Desert.

Thousands have been killed in raids on rural communities and millions have been forced to flee.

An Al Qaeda branch this week claimed an attack that killed at least 27 soldiers in northern Burkina Faso days before the coup unfolded.