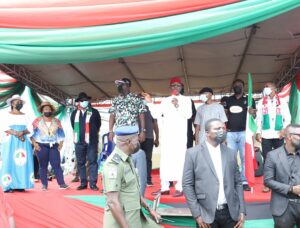 Delta Governor, Dr. Ifeanyi Okowa, on Wednesday, called on members of the Peoples Democratic Party (PDP) in Isoko South Local Government Area to unite and mobilise massively for the state’s House of Assembly bye-election in Isoko South Constituency 1 on Saturday.

Okowa made the call while addressing PDP members and supporters at a rally at Oleh.

He explained that mobilisation of the electorate was necessary in view of the new Bimodal Voter Accreditation System ( BVAS ) device which would ensure simultaneous accreditation of voters with finger prints and photograph to ensure authenticity and validity of votes cast.

The governor called for unity among party leaders and stakeholders ahead of the Saturday polls, saying that quarrelling was part of politics but that the people should not allow anger to destroy the collective interest of the people.

“There is need to be united because a divided people cannot develop as much as a united people and I want brotherly love and unity to continue to reign in Isokoland.

“Isoko people are already a blessed people and it is my prayer that Isoko nation will not see the kind of things that happened this year because we have lost a lot of sons and daughters of Isoko this year alone,” he said.

Okowa commended party leaders and stakeholders in the area for resolving to work in the interest of the party and its candidate for the bye-election, Mr Ovuakpoye Evivie.

“Let us mobilise the people to come and vote and after voting stay and protect your votes.

“I look forward to hearing the result because I am very sure we will win convincingly and shut up mouth of opposition once and for all,” he stated.

On electricity challenge in Oleh, the governor said that he would liaise with the Commissioner for Energy, Mr Jonathan Ukodhiko, to proffer solution.

He said that his administration would solve the problem because it was necessary to do so and not because of the election ahead.

“As at today, the issue of energy and power is no longer in the hands of the state government. So, whatever we do in that regard is to assist our people because the sector has been privatised already,” he stated.

The state’s Chairman of the party, Chief Kingsley Esiso, urged the people to remain steadfast in their support for PDP.

He said that the ruling party at the centre had nothing to offer other than encouraging incompetence, insecurity, hunger and poverty in the country and called on party faithful to come out enmasse to vote for the umbrella party.

Chairman of the party in Isoko South, Chief Godspower Obaro, said the people of Oleh would vote PDP in appreciation of the massive infrastructural development in the area, especially the reconstruction of Old Oleh-Ozoro road and dualisation of Emore Road by the Okowa administration.

He said the opposition candidate lacked political background and acceptability to win elections, adding that PDP would win convincingly on Saturday.

Director-General of the Campaign Council, Chief Itiako Ikpokpo, called for vigilance among the electorate to ensure that voting was not disrupted during the election.

Hundreds of All Progressives Congress (APC) members led by Mr Jonathan Egbe, defected to the PDP at the rally.