By Admin
96
0
The Minister of Niger Delta Affairs, Senator Godswill Akpabio, says that the Niger Delta Development Commission, NDDC, has shown focus and determination by completing its 13-floor new headquarters building at the Marine base in Port Harcourt.

Akpabio who commissioned the building on behalf of the President 25 years after the groundbreaking ceremony, described the successful completion of the building as, “A milestone which shows the commitment of President Muhammadu Buhari to the development of Nigeria particularly the Niger Delta region.”

The president, who virtually inaugurated the building from the Council Chamber of the State House, Abuja, commended the Minister of Niger Delta Affairs, Sen. Godswill Akpabio, for steadfastness in ending many years of renting by the commission, and the attendant profligacy.

He added that the new complex was a testimony to the fact that President Muhammadu Buhari was determined to reposition the NDDC for the rapid development of the Niger Delta region.

“The NDDC has added to the infrastructural transformation of the Niger Delta. It gladdens my heart to see to the completion of this project. It shows that, indeed, Nigeria can change with determination and focus. I have seen it here in the NDDC,” Akpabio stated.

The former governor said the previous administrations that neglected the project may have had their reasons but it was important to note that a new leadership with focus and determination will always make a difference. 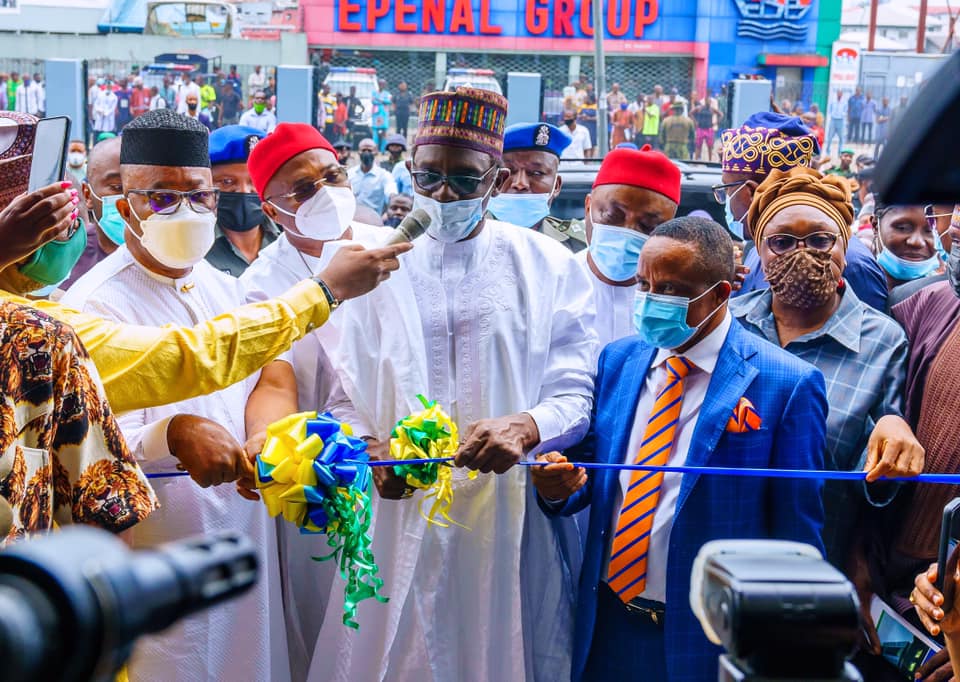 “After the visit, I decided that I will convince Mr. President on the need to make the project a focus for the NDDC and a major achievement for the Federal Government which would also be used to reposition the NDDC. It came down to two major things; the forensic audit and the completion of the new headquarters.”

The Minister acknowledged the fact that a journey of a thousand miles begins with one step. “That step has been taken by the completion of this building. For the first time the NDDC has a befitting complex,” he said.

He said further: “What I have seen today, justifies the request for a furnishing contract for the new office complex. I will take the request to the Federal Executive Council for approval.”

Akpabio stated that henceforth, NDDC would undertake regional projects, linking the states in the region with good roads. The Commission, he said, would also rejig its modus operandi and this would include the laws governing the Commission. He thanked the National Assembly for initiating action in this direction.

Speaking on the NDDC Post Graduate Foreign Scholarship programme, Akpabio, stressed the need for a comprehensive review. According to him, “We should use the universities in the country so that many more people will benefit. A review of the programme will help us to extend it to more beneficiaries.”

The Minister assured that by the time the on-going forensic audit was completed, NDDC would experience tremendous change, advising those calling for a new board for the Commission to wait for the completion of the forensic exercise.

In his remarks, the NDDC Chief Executive Officer, Mr. Akwa, thanked President Buhari and Senator Akpabio, for their determination to see to the completion of the new headquarters building.

He said that the new office complex, started by the defunct Oil Minerals Producing Areas Development Commission, OMPADEC, in 1996, has come to fruition after many years of inaction by previous administrations.

He noted: “When the Minister came to inspect the project, he met a skeletal building. The Minister insisted that this project must be completed.

“The president agreed with the Minister and approved that resources be put in to complete the project. This is a big achievement for the NDDC and the supervising ministry. The transfer of the supervision of the NDDC to the Ministry of Niger Delta Affairs has paid off and the result is what we are seeing today.

“The contractor has done a good job and I commend his efforts. The media has a duty to inform the world that a new thing has happened in the Niger Delta region.”

Akwa also commended the Rivers State Governor, Nyesom Wike, and the members of the host community for ensuring that the project was completed without hindrance.