COVID-19: One in every 5 persons tested last week was positive – PTF Chairman 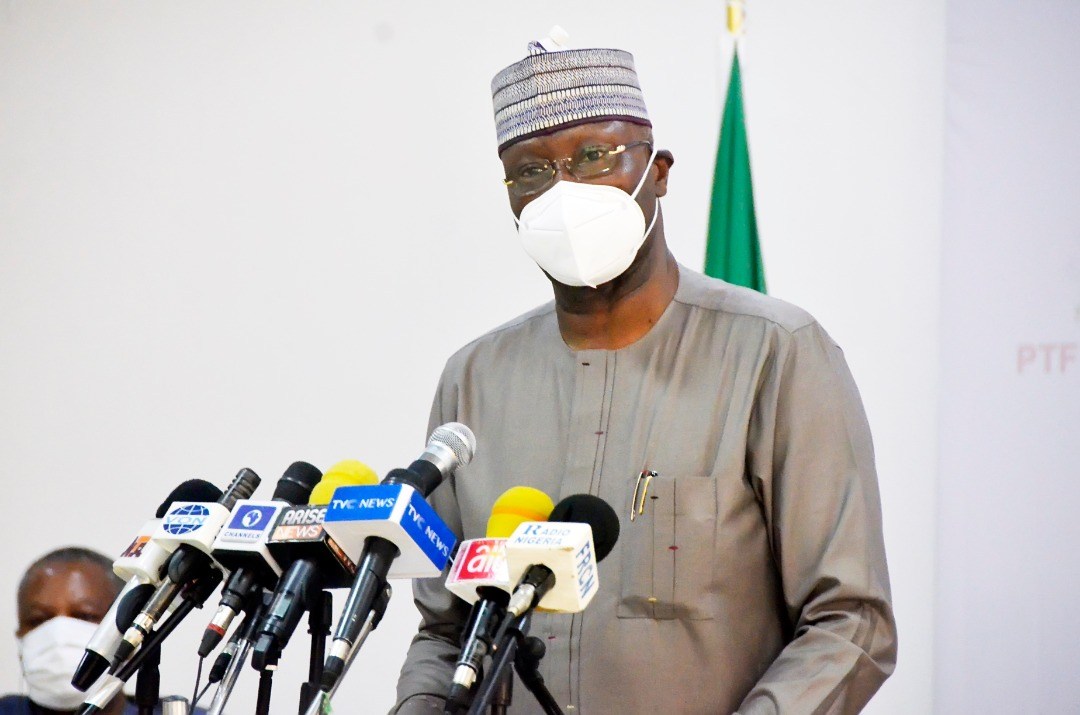 COVID-19: One in every 5 persons tested last week was positive – PTF Chairman

By Admin
January 19, 2021
Chairman of the Presidential Task Force (PTF) on COVID-19, Mr. Boss Mustapha says Nigeria and South Africa have continued to report the highest daily count of COVID-19 on the African continent.

The PTF Chairman while giving his remarks on Monday noted that one in every five persons tested in Nigeria within the passing week turned out positive.

Boss Mustapha said South Africa, Ethiopia, Nigeria, Algeria, and Kenya now account for 76% of all cases in the African region.

According to him, Nigeria has moved up to the third position in the highest cumulative caseload but remains 2nd for new cases and 5th highest in cumulative deaths in the WHO African region.

Mr Mustapha who doubles as Secretary to the Government of the Federation (SGF) said from the foregoing, testing has proven to have become more significant in the nation’s response, adding that the PTF still urges the State Governments to enable their EOCs to step up on sample collection and to maximise the capacities of the PCR Laboratories already established in their States.

He further disclosed that the PTF has also authorized the NCDC to immediately implement the 450 tests per LGA plan, nationwide, immediately, beginning with States that are at the forefront of resourcing and infrastructure.

The PTF Chairman reemphasized the need for all segments of the society to get involved in risk communication and community engagement.

He added that in the PTF’s continued collaboration with religious and traditional rulers, the taskforce aligns with the statements issued by the Christian Association of Nigeria (CAN) guiding the sick and the elderly on the need to avoid large gatherings by staying at home.

Regarding the positive news about vaccines, Boss Mustapha assured Nigerians that the PTF will ensure that the vaccines to be approved will be safe and effective.

“We must however work together as foot soldiers in the vaccine advocacy so that we can eliminate the pandemic. The PTF wishes to emphasise that the success of our national response shall not depend on vaccines alone. Rather, compliance with the non-pharmaceutical protocols must remain top on our individual priorities,” he stressed.

The SGF also said that the nation is making progress with Case Management under its National Response.

In his words, “The National Response continues to receive the support of the private sector in the delivery of medical oxygen to the various facilities.

“At the same time, funds for the rehabilitation of existing oxygen facilities have been released to the various institutions. There is also a process in motion to ensure the construction of at least one oxygen facility in each state.”

Mr. Mustapha while reminding Nigerians that the pandemic is raging, noted that all tiers of Government and citizens must keep their hands-on-deck.

“We are in a difficult situation in which a balance must continue to be struck between lives and livelihood.

“We are considering all options while hoping that broad cooperation will be received. We must do everything possible to avoid the second lockdown in Nigeria,” Mr. Mustapha stated.

The PTF boss said the task force is proceeding with the next phase of the approved Presidential sanction against all in-bound international travelers that failed to undergo the day-7 post arrival test.

According to him, the PTF will publish the next list of 100 defaulters very soon.

​Prior to the briefing on Monday, the PTF had informed Nigerians about the resumption of schools nationwide, the task force through its chairman reassured that the resumption would be reviewed due to rising daily numbers of infections and the challenges of case management especially the shortage of oxygen. This he says is very crucial as not to allow the nation’s health facilities to be overwhelmed.

​While several states have proceeded with the resumption of schools, the PTF recommended strongly that very strict adherence to Non-Pharmaceutical Interventions should be enforced by the States to avoid the escalation of cases.

The PTF Chairman said dialogues with the Governors and the Federal Ministry of Education to closely monitor the situation will continue.

Below is a snapshot of the nation as of 17th January 2021 which ought to guide the nation’s decisions and approach.

They are as follows:

In week two of 2021 the statistics revealed the following:

It is pertinent to note that all the numbers represented increases compared with the numbers from week one, 2021.