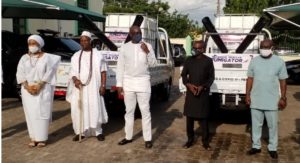 The Ooni of Ife, Oba Adeyeye Enitan Ogunwusi Ojaja II, has called for collective global effort in the fight against COVID-19.

The Ooni made the call in Asaba while presenting two locally-fabricated modular fumigators to Delta Government to assist the state in its effort at containing the spread of the pandemic.

The monarch, who was represented by his Director of Media and Public Affairs, Comrade Moses Olapare, said that the Coronavirus was a common enemy that required the cooperation of all to defeat it.

According to him, the fight against the pandemic calls for a collective effort as it is no longer practicable for monarchs to sit down and watch government tackle societal problems alone.

“Our leaders, at both federal and state levels, have done very well in the fight against the virus and in this regard, we have decided to complement the efforts of the government and that’s why we came up with this innovation for motorised modular fumigators.

“The fumigators were invented by the House of Oduduwa and fabricated at the Ooni palace in Ile-Ife with 100 per cent locally-sourced materials.

“It is our belief that the era when monarchs sit in the comfort zone of their palaces and expect the government to do it all is over.

“So, we have decided to join hands with government to tackle this pandemic by this donation of two motorised modular fumigators.

“We have watched your proactive approach to the fight against the pandemic in Delta and I must say that we are pleased with every step you have taken so far.

“This is why we are committed to working with government by making this donation, because together we can fight the battle and together we shall win the battle,” he stated.

Receiving the equipment, Delta Governor, Sen. (Dr) Ifeanyi Okowa, thanked the Ooni for his thoughtfulness and innovation in the production of the motorised fumigators.

The governor, who was represented by Secretary to the State Government (SSG), Mr Chiedu Ebie, said that the state had put in so much to ensure that COVID-19 was contained in the state and called for further support and cooperation in the fight against the pandemic.

“We thank His Imperial Majesty for his wonderful donation today. In Delta as at today, we have recorded 27 cases while 12 have been successfully managed and discharged; unfortunately we lost five of the cases.

“We are indeed very delighted that His Imperial Majesty came up with these innovative fumigators in his bid to contribute his own quota in the fight against COVID-19 and he is going around the states to donate them.

“We thank you very much for the thoughtfulness and the innovation in coming up with this and it will definitely go a long way in the fight against COVID-19,’’ he said.

The Commissioner for Environment, Mr Chris Onogba and his Agriculture and Natural Resources counterpart, Mr Julius Egbedi, witnessed the ceremony.