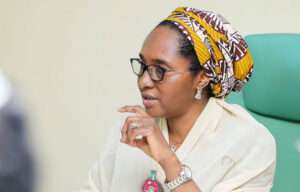 The World Bank has a proposal of 1.5 billion dollars to states as part economic stimulus to cushion the impact of the COVID-19 pandemic, says Minister of Finance, Zainab Ahmed.

The first ever virtual NEC meeting and the fourth for the year, was presided over by Vice President Yemi Osinbajo

“The World Bank maintains that the impact of the COVID-19 on Nigeria will lead to severe amplified human and economic cost, which will move the country into a recession.

“The World Bank planned a proposed package for immediate fiscal relief for the FG.

“The World Bank package has also got a proposal of 1.5billion dollars for the states and this package will be dedicated to the states and it will be a programme for results which the states are already used to implementing.’’

According to her, the immediate fiscal relief for the states will include the acceleration of an existing programme to enable disbursement by end of September.

She said that by the end of September, the 1.5 billion dollars plan would have been disbursed to the states.

“We are looking at an average of between N150 billion to N200 billion based on the plan to the 36 states.

“These are states that have already made some particular commitments and achievements so that they will be able to get immediate disbursements of parts of these funds.’’

Ahmed said that the ministry made a presentation to the council on the structures that the Federal Government was looking at and putting in place, or had put in place to tackle the challenges of COVID-19.

According to her, the country is in a very difficult and challenging time, facing a very significant economic downturn that has not been seen in the history of the country.

She said that the global economy was also facing the sharpest reversals since the great depression as it had both health and economic consequences.

Ahmed said that COVID-19 had resulted in the collapse in oil prices.

“This will impact negatively, and the impact has already started showing on the federation’s revenues and on the foreign exchange earnings.

“Net oil and gas revenue and influx to the federation account in the first quarter of 2020 amounted to N940.91billion.

“This represented a shortfall of N125.52 billion or 31 per cent of the prorated amount that is supposed to have been realised by the end of that first quarter.

“40 per cent of the population in Nigeria, today, is classified as poor; the crisis will only multiply this misery.

“The economic growth in Nigeria, that is the GDP, could in the worst case scenario, contract by as much as minus -8.94 per cent in 2020.

“But in the best case,  which is the case we are working on, it could be a contraction of minus -4.4 per cent, if there is no fiscal stimulus.

“But with the fiscal stimulus plan that we are working on, this contraction can be mitigated and we might end up with a negative –0.59 per cent.’’

The minister said that the president set up the Presidential Economic Sustainability Committee in addition to the COVID-19 Response Committee that had been set up, the COVID-19 PTF as well as the Crisis Management Committee.

She said that the Federal Government was committed to supporting the financial viability of states, including the suspension of payments in respect of commitments, debts that have been secured with ISPOs by the states at the federal levels.

“So, we have already implemented suspension of deductions of a number of loans that have been taken by the states from April and also in May.

“The Economic Sustainability Committee is responsible for providing overall strategic vision, policy direction and general oversight of the implementation among others,’’ she said.

She said that some of the measures to mitigate the COVID-19 impact on the economy included the N500 billion stimulus package that the president had approved.

Ahmed said the package also included the increase in the social register by one million households to 3.5million for cash transfer programmes and palliatives and other social safety net programmes.(NAN)