COVID-19: Ugwuanyi turns back over 100 vehicles entering Enugu in one night 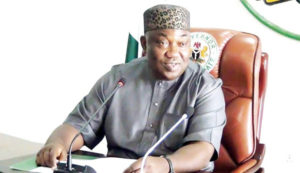 The Senior Special Adviser on Media to Enugu State Government, Mr Louis Amoke, made this known in a statement on Sunday in Enugu.

Amoke said that the governor turned back the offending vehicles on Saturday night at the Amechi Idodo/Nkalagu land boundary area of the two states.

“Gov. Ugwuanyi,  evening of Saturday, May 23, paid an unscheduled visit to Enugu-Ebonyi land boundary area to monitor compliance with the ban on inter-state transportation aimed at containing the spread of COVID-19.

“The governor, who met over 150 vehicles, queued at the Enugu axis of the boundary attempting to enter the state; trekked a long distance interrogating the drivers, one by one, to ascertain their eligibility for entering the state.

“Consequently, over 100 vehicles that were not on essential duties were identified and turned back to Ebonyi State where they were coming from,’’ he said.

The governor’s aide noted that while on the enforcement exercise, Ugwuanyi met with the Deputy Governor of Ebonyi, Mr Kelechi Igwe, who was on transit, and had a brief discussion with him. (NAN)