The Nigeria Customs Service, Area II Command, Onne Port, Rivers, says it generated over N13.11 billion in September. This is contained in a statement issued in Port Harcourt by the command’s Public Relations Officer, Mrs Ifeoma Ojekwu on Friday. 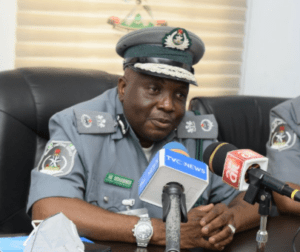 The Controller of the command, Comptroller Auwal Mohammed, is quoted to have described the figure as the highest in 37 years of custom’s operations in the port.

Mohammed stated that the command generated the revenue by putting in place robust mechanisms to reduce smuggling and duty evasion in the port.

“The over N13.11 billion generated in the month of September is the first month scorecard of the Customs Area II Command, Onne Port since I took office on Sept. 1.

“In addition, the feat is a combination of efforts by my very diligent officers and men, who are unrelenting in the discharge of their duties,” he said.

Mohammed said the command recorded the feat by processing a total of 18,085 metric tonnes of export activities within the period.

“Others are 100 pieces of car fans and four units of bed trailer trucks with total Duty Paid Value of N99.917 million in September,” Mohammed said.

The controller assured that efforts would be redoubled to surpass the feat.

According to him, the command is focused on purging all forms of leakages in the port to further generate more revenue for the Federal Government.

“Where shortfalls are detected, I will ensure uncompromising recovery through “Demand Notice’’ to prevent revenue losses.

“We will continue to make this command a no go area for perpetrators of smuggling, concealment, duty evasion and other forms of illegality.

“We will achieve this by seizing all illegally imported and prohibited goods; arrest the perpetrators and prosecute them in accordance with the Customs and Excise Management Act,” he added.

Mohammed assured the handover of suspects whose offences fall under the purview of other government regulatory and enforcement agencies for investigation.

According to him, the command has recently met with all relevant government agencies in the state to partner and ensure inter-agency cooperation among them. (NAN)

LASG arrests 31 persons for engaging in ...