Delta Government on Wednesday, said it would seek public-private-partnership in the development of its three new universities. 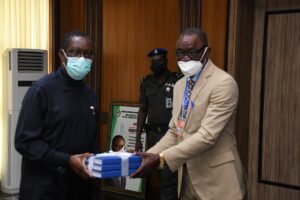 Chairman of the Project Management Committee for the universities, Professor Patrick Muoboghare, disclosed this while presenting the Committee’s report to Governor Ifeanyi Okowa at Government House, Asaba.

Muoboghare, who is the immediate past Commissioner for Higher Education in the state, said that the Committee which was inaugurated on April 7, 2021 sat for 32 days, concluding its work on June 4, 2021.

He stated that the 329-page report and the Executive Summary touched on such areas as pension, nature of the universities and the way the universities should go with particular emphasis on adherence to acceptable academic to non-academic staff ratio, establishment position and staff mix.

He added that with the establishment of the universities, Delta now had four universities that offer Medicine, Architecture, Geology, Engineering, Agriculture, Regional Planning and Quantity Surveying.

Muoboghare said that the universities were grounded in the sciences and other areas such as Law that had driven parents and children outside the shores of Delta in search of the Golden Fleece.

According to him, the private sector shall be a key player in the development of the universities thus moving Delta universities from an era of 100 per cent dependent on government to a new era of university autonomy in its true sense.

“We do not envisage a university that will run to Abuja or Asaba to seek permission before engaging necessary staff as that would amount to a breach of university autonomy which is inconsistent with best practices worldwide.

“We believe that if our recommendations are approved and implemented, these universities shall rub shoulders with the best on the African continent,” Muoboghare stated.

Receiving the report, the governor thanked the committee for being able to conclude the work and submitted the report on time.

He assured the Committee of implementation of its report and urged the members to make themselves available to assist further in the running of the universities.

“I must thank members of the Committee for being able to do your work quickly and to submit a report as early as this.

“There is no doubt that you put in a lot of work because I do know that you gave it all your passion and time to be able to achieve this report.

“There is still a lot of work to be done and we will still need your inputs even as we begin the journey to truly bring the three universities to a functional state.

“Where we need further clarifications we will call on you to give us further views as to how to implement those recommendations.

“I am aware that some work is already being done in terms of looking at the existing staff of the former institutions and to see those of them that could truly be absorbed in the universities.

“As much as possible, we want to retain the staff of the institutions, who have the necessary qualifications to be able to function in the upgraded institutions.