Worried by the growing infrastructural decay at its alma mater, members of Igbanke Grammar School Old Students Association, Igbanke, have commissioned and handed over to the school an administrative block renovated by the association. 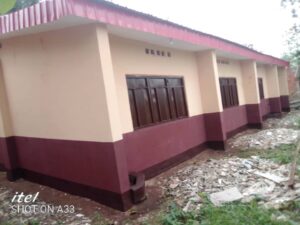 Present at the event, which also featured the commissioning of the renovated administrative block of the institution by members of the Association, were old Boys and Girls of the School who included the Steering Committee Chairman,  Mr. Jacob Erhabor, the Dean,  Faculty of Arts,  Ambrose Ali University,  Ekpoma,  Prof. Benjamin Egede,  President General, Igbanke General Union,  Engr. Arthur Osiagwu,  as well as current students of the school, among others.

In his speech, titled; “We Can Play Politics with our politics,  but not with our Education”, the Chairman of the occasion and former student of the school,  Mr. Duke Igbinedion, advocated the need for student associations such as Igbanke Grammar School Old Students Association, to be given the constitutional role in the management of their alma mater.

Igbinedion,  while commending the Edo State Government for the ongoing modernisation efforts in the education sector through the Edo Best programme,  however,  stressed the need for higher budgetary allocation to the sector.

This, according to Igbinedion, has become necessary as it “is the only way to guarantee the future of our Children and that of the nation.”

Earlier in his address of welcome,  the Steering Committee Chairman,  Mr. Jacob Erhabor, while commending members for their collective interest in the project of restoring the lost glory of the school, appealed that all hands must be on deck in actualising the vision.

Erhabor, who was later elected pioneer President of the Association, rising from the AGM,  announced a three year scholarship award for three best graduating students of the school.

Meanwhile,  the principals of the school, Mr. R.I Imonite (Senior School) and Mr. J.O Aifuwa, in their collective speech, commended members of the Association for their initiative just as they enjoined them to continue to work in collaboration with the state government towards enhancing the infrastructural status of the institute.

Highlight of the programme was the handing of keys of the block by chairman of the occasion, Mr. Duke Igbinedion, to the Principal of the Senior School, Mr Imonite

Amotekun Arrests Over 250 Cows For Destroying ...