As they were ushered into CG’s office one after the other like school children awaiting punishments, they were given letters of premature retirement because all of them have upwards of two years to spend before their retirement ages

A gale of retirements of senior officers has hit the Nigerian Correctional Service (NCoS), formerly known as Nigerian Prison Service. 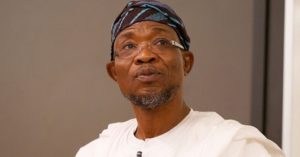 It was gathered that seven serving Assistant Controller Generals (ACGs) who took part in the screening and examination as candidates that later produced the current Controller General were ‘arbitrarily’ sacked by the Minister of Interior, Ogbeni Rauf Aregbesola.

Aregbesola is the Chairman of the Civil Defence, Correctional, Fire and Immigration Board (CDCFIB).

The officers who were summoned from various stations outside Abuja to the National Headquarters of the service purportedly for a meeting with the newly-appointed Controller General, Haliru Nababa were shocked when they were handed letters of voluntary retirement with effect from 9 June 2021.

The retirement letter signed by one Mrs Aisha A. Rufai of CDCFIB, and sighted by PRNigeria reads: “In view of the convention on seniority in the military and paramilitary services in respect to the newly appointed Controller-General, and in addition to other antecedents, you are hereby advised to proceed on voluntary retirement from the service with effect from 9th June 2021.”

A source who witnessed the drama said that they were tricked to meet the new CG in his office one by one.

“As they were ushered into CG’s office one after the other like school children awaiting punishments, they were given letters of premature retirement because all of them have upwards of two years to spend before their retirement ages.

“None of the retired officers was senior to the new CG which is evident in the staff nominal rolls. For instance, there are three DCGs who were promoted with effect from 1st January, 2019 and 2020, and by that are senior to the CGC whose date of appointment is APRIL 2021.

“Surprisingly, the DCGs were left in the service while the seven ACGs whose dates of promotional appointment are 1st January 2018.

“Also, in 2006 when Olusola Ogundipe was picked from among the ACGs, he worked with his hitherto superiors. In 2012 when Zakari Ibrahim (DCG) was appointed, he did the same, so also Dr. Peter Ekpendu in 2014.

“Similarly, when the immediate past substantive CGP was appointed, he worked with his superior and contemporaries. The only senior officer to him by name Alhaji Aminu Sulley he wanted to retire took the matter to court and it was decided in his favour,” the source said.

“The cancellation of the letter and subsequent returns of these officers who are some of the brilliant in the cadre will give bite to the reform of the NCoS as spelt out in the Correctional Service Act, 2019 which was graciously assented to by Mr. President.”

Meanwhile, some of the affected officers are calling on President Mohammad Buhari, the Senate President and Speaker of House of Representatives to look into the matter and redress the anomaly in the interest of equity, justice and fairness.