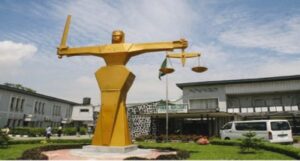 The Department of State Services (DSS), on Monday, failed to produce four out of the 12 detained associates of Yoruba nation activist, Sunday Adeyemo, also known as Sunday Igboho, before a Federal High Court, Abuja.

However, the DSS brought eight of the detainees before Justice Obiora Egwuatu, following the ex-parte motion moved by Counsel to the applicants, Pelumi Olajengbesi, on July 23.

The four detainees, who were not in court, include Abdullateef Ademola Onaolapo, Uthman Opeyemi Adelabu, Oluwafemi Olakunle and Opeyemi Tajudeen.

When the matter was called, the applicants’ lawyer informed the court that he had a motion on notice, seeking the order of the court to amend the processes already filed.

He said the amendment was to allow him regularise the processes to reflect all that was needed after he had been able to gain accesses to his clients at the DSS facility.

“We have a motion on notice dated July 30 and filed August 2,” he said.

He said the motion was brought pursuant to the relevant constitution of the country and under the inherent jurisdiction of the court.

“The motion is supported by 8-paragraph affidavit and we rely on all of the averments therein.

“It is supported with a written address and we seek to adopt same as our argument. We pray the honourable court to grant our application,” he said.

Olajengbesi then hinted that only eight of the detainees were brought to court by the security agency, reeling out their names. He urged the court to mandate the DSS to produce all the12 detainees in court in the next adjourned date.

The DSS Lawyer, I. Awo, said though he was just served with a copy of the motion same day, he did not oppose it.

Awo, however, said though amendment is at the discretion of the court to either grant or refuse, “giving order being sought by my leaner friend is in effect trying to preempt the court.”

The DSS lawyer informed the court that a section of the media did not report what really transpired in court in the last adjourned date.

He said contrary to what he said, it was reported by some section of the press that the service was holding onto only four detainees of the 12 suspects arrested.

He said such report implied that the other detainees had, probably, dead, the development which almost caused chaos in the south west.

“This almost caused a breakdown of law and order over there.

“I appeal to my lord to caution the media not to report what does not happen in court,” he said.

He said following the court order to grant the detainees’ lawyer access to them in the last adjourned date, he said the DSS complied, granting their counsel accelerated access to them.

He said it was disheartening that after meeting with the clients, Olajengbesi “told the media that we fed the detainees with engine oil.”

“This, we can never do. If they were fed with engine oil, they would have died,” he said.

Responding, Olajengbesi, who said the allegation was not baseless, said his clients told him when he visited them.

Justice Egwuatu urged the media to always report rightly, or even apply for the court documents if the need be.

The judge also cautioned Olajengbesi to be careful what he says outside the court, saying it was not possible for the detainees to have been fed with engine oil.

Egwuatu, who granted the prayer for amendment of the application file, adjourned the matter until Aug. 4 for hearing of the substantive matter.(NAN)