WHO Regional Office for Africa in Brazzaville, Congo, raised the concern in a statement posted on its website on Friday.

According to the UN health agency, confirmed cases have now surpassed the total number recorded during the province’s last outbreak in 2018.

It noted that “the latest outbreak, DRC’s 11th, was declared on June, 1, 2020 after a cluster of cases was detected in Mbandaka area of Equateur Province.

“The outbreak has since spread to six health zones, with 56 cases recorded.

“The city of Mbandaka and its surroundings were also the site of the country’s 9th Ebola outbreak which lasted from May to July 2018 and in which 54 cases were confirmed.

“Of the 56 cases reported so far, 53 are confirmed and three are probable. In the last three weeks alone, 28 cases have been confirmed.”

The statement quoted Dr Matshidiso Moeti, WHO Regional Director for Africa, as saying: “responding to Ebola in the midst of the ongoing COVID-19 pandemic is complex.

“It is complex but we must not let COVID-19 distract us from tackling other pressing health threats.

“The current Ebola outbreak is running into headwinds because cases are scattered across remote areas in dense rain forests.

“This makes for a costly response as ensuring that responders and supplies reach affected populations is extremely challenging.”

According to WHO, the ongoing Ebola response is also facing funding shortfalls. So far, the organisation has mobilised 1.75 million dollars, which will last only a few more weeks.

The world body added that “additional support is needed to rapidly scale up the efforts by WHO, the DRC health authorities and partners.

“Significant achievements have been made since the outbreak began. In six weeks, more than 12, 000 people have been vaccinated.

“During the 2018 outbreak in Equateur, it took two weeks to start vaccinations. This time around, vaccinations started within four days of the outbreak.”

In addition, the statement noted, that the current response built on lessons learned from the country’s previous Ebola outbreaks, which underscored the importance of working closely with communities.

“Around 90 per cent of the vaccinators in the ongoing outbreak are from the local communities. 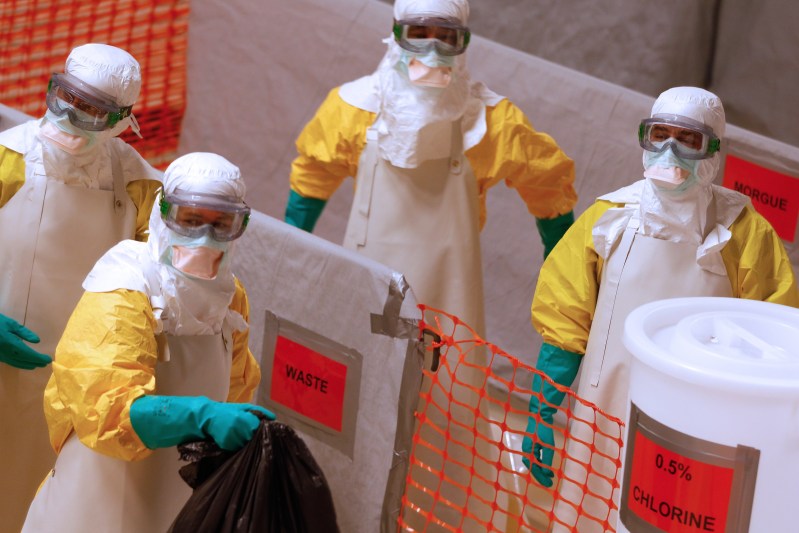 Medical workers wearing protective suits take part in a training prior to leave to countries affected by the Ebolas virus, in an empty factory warehouse in Amsterdam, on November 5, 2014 where medicals aid group Medecins Sans Frontieres (MSF) created a mock clinic. The disease has killed nearly 5,000 people, almost all of them in Sierra Leone, Liberia and Guinea. AFP PHOTO/ANP/BAS CZERWINSKI-netherlands out- (Photo credit: BAS CZERWINSKI/AFP/Getty Images)

“Working with local responders inspires trust between communities and health workers and making the emergency response more effective,” it said.

Also, the statement said that WHO, along with the Ministry of Health and partners, had been engaging with communities to increase understanding of the virus and local support for response activities.

“More than 40,000 households have been visited by community health workers and more than 273, 000 people have been provided with health and safety information,’’ it added. (NAN)

Ede hopes her ownership of the Portuguese ...