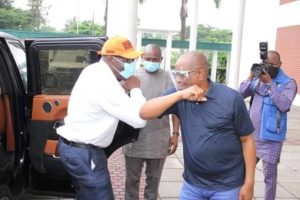 Obaseki and Wike in Covid-19 greeting

Gov. Godwin Obaseki of Edo was in Government House, Port Harcourt on Sunday to visit Gov. Nyesom Wike of Rivers, in an apparent bid to cement a spot in the PDP as its flagbearer in the governorship election in his state.

Purpose of the visit was not disclosed but the two governors later held a closed-door meeting at the Government House.

Obaseki’s visit to Wike is coming on the heels of the disqualification of the former from contesting the upcoming Edo governorship election on the platform of the APC.

The APC had approved its screening and appeal committees’ reports which disqualified Obaseki and two others from participating in the June 22 governorship primaries in Edo.

The appeal panel, headed by Prof. Abubakar Fari also upheld the outcome of the screening committee, while presenting the report to Oshiomhole at the APC National Secretariat in Abuja.

The Independent National Electoral Commission has slated Sept. 19 for the governorship poll in Edo.

Meanwhile, the Progressives Governors Forum has resolved to intervene in the current crisis rocking the All Progressives Congress (APC) in Edo and Ondo states ahead of the governorship election in the states.

The Chairman of the Forum, Gov. Abubakar Bagudu of Kebbi, said this in a statement in Abuja on Sunday.

“The governors have collectively agreed to work to ensure strengthening fair and democratic internal party mechanism for the selection of party candidates in all elections, especially in respect of Edo and Ondo states 2020 Governorship election,” he said.

He recalled that the National Working Committee (NWC) of APC had on Saturday affirmed the disqualification of Gov. Godwin Obaseki of Edo and two other aspirants who had earlier been disqualified by the screening committee.

“The Governors are confident that the party will resolve all current challenges and emerge stronger.

“The APC governors forum which had a teleconference meeting on Saturday unanimously reaffirmed its commitment to work for the unity of our party,” he said.

Outrage as another female student is raped, ...