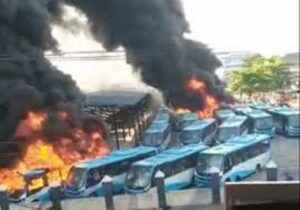 No fewer than 6 policemen plus a couple of civilians were killed; 32 police stations and 200 BRT buses were among lives and property destroyed a year ago during the #EndSARS protests which rocked Lagos as part of the nationwide rage to draw attention to the unprofessional conduct of the Special Anti-Robbery Squad (SARS).

Aside public institutions, many entrepreneurs and private citizens suffered huge losses in the mayhem as their shops, malls, warehouses and offices were looted without restraint.

Friends of Lagos recalls in an advert: “When we reflect on the outcomes of the moments of wrath, our hearts bleed, and we say: Never Again in Lagos.”

Meanwhile, there appears a looming standoff on Lagos roads as security men have taken vantage positions to quell any outbreak of law and order during the planned anniversary procession by activists, celebrities and other Lagosians.

But Lagos State Police Command on Tuesday said it will only allow indoor and virtual events.

Briefing reporters in Ikeja, the State Commissioner of Police, Hakeem Odumosu, said the police would not allow any form of protest except vehicular procession.

The police commissioner cautioned residents, especially the youth against embarking on any form of protest without the approval of the police.

Odumosu explained that such approval will enable police deployment for adequate protection against hoodlums who could hijack the exercise.

“If you want to go on vehicular procession, okay. They are not going to stop somewhere, come down somewhere and converge somewhere,” he said.