Jos, Nov.24, 2020- Some of the  people who participated in the looting, vandalism of warehouses and other public and private property during the #EndSARS protest in Plateau have returned their loot and sought forgiveness. 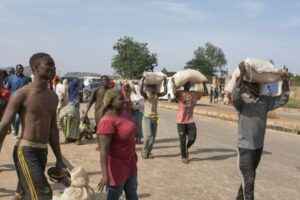 #EndSARS looters after raiding a warehouse

The repentant persons were led by Rev. Ezekiel Dachomo, the Coordinator of the Prayer and Revival Unit of Church in Christ Nations (COCIN) to the  Government house, Jos, on Tuesday,  to ask Gov. Simon Lalong for forgiveness.

According to the statement, over 2,000 people repented during the revival programme after listening to the  pastor preach against the recent looting and vandalism, which affected public and private property in the state.

The clergyman was quoted as saying ” the COCIN prayer and revival unit organised a seven days prayers revival crusade at Zang Secondary School with more than 10,000 persons in attendance.

” When we asked for those that participated in looting of what belongs to the state, telling them to come forward with whatever they have, the people that came before the Altar were more than 2,000.”

Dachomo said the looting was at the verge of breakthrough of Plateau, to truncate the will of God and progress of the state, saying the revival was to intercede for the state.

He said some of the looters, after hearing the message, repented and decided to bring the items still in their possessions, as a mark of restitution and plea for mercy from God and the Government of Plateau.

The cleric appealed to Lalong to forgive the repentant persons as they promised never to partake in such acts again.

Receiving the items on behalf of the governor, Secretary to the Government of the State, Prof. Danladi Atu, commended Rev. Dachomo for appealing to the consciences of the affected persons who came forward to ask for forgiveness.

He said the action of the looters was a great disservice to the state as not only food items were looted, but heavy machinery, public infrastructure and businesses worth billions of naira were stolen and destroyed.

He advised the youths of the state to shun listening to incitement by people whose aim was to orchestrate destruction.

He promised to forward the plea of the repentant persons to the governor for further consideration.