#ENDSARS memorial: One year later FG still demands apology from AI, CNN, others for misleading the world that there was a massacre 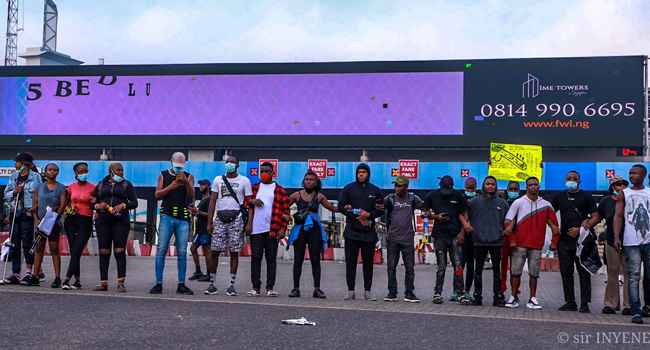 #ENDSARS memorial: One year later FG still demands apology from AI, CNN, others for misleading the world that there was a massacre

… The only ‘massacre’ recorded was on the social media

The Federal government has restated its position on the Lekki toll gate incident of Oct. 20th 2020.

The minister of information and culture, Alh. Lai Mohammed disclosed this on Wednesday at news briefing to commemorate one year of the #ENDSARS Lekki toll gate alleged massacre.

According to him, “with the preponderance of evidence against any massacre at the Lekki Toll Gate on Oct. 20th 2020, we are once again reiterating what we said one year ago”.

He stated: “The military did not shoot at protesters at the Lekki Toll Gate on Oct. 20th 2020, and there was no massacre at the toll gate. The only ‘massacre’ recorded was in the social media, hence there were neither bodies nor blood”.

He went further to demand that Amnesty International, CNN, “a runaway DJ and others like them should apologize for misleading the world that there was a massacre at the Lekki Toll Gate and for portraying the Nigerian military, police and other security agencies in bad light”.

“CNN acted unprofessionally by relying on unverified, and possibly-doctored social media videos, as well as other open-source information, to conclude that a massacre took place at the toll gate.

Mohammed added that the Federal Government remains proud of the security agencies for acting professionally and showing utmost restraint all through the #ENDSARS protest and the ensuing violence, an action that saved lives and properties.

“The six soldiers and 37 policemen who died during the #ENDSARS protests are human beings with families, even though the Human Rights Organizations and CNN simply ignored their deaths, choosing instead to trumpet a phantom massacre.”

OTHER ISSUES RELATED TO ENDSARS

Giving an update of government’s role in addressing issues raised during the #ENDSARS protests, he said, the National Economic Council (NEC), which comprises all State Governors and representatives of the Federal Government, and chaired by the Vice President, has already addressed other issues relating to the #ENDSARS protest.

According to him, “At its meeting on 15 October 2021, the NEC received an update on the Reports of Judicial Panels of Inquiry into Allegations of Human Rights Violations against Members of Nigeria Police Force and other Security Agencies. Note that 28 States and the Federal Capital Territory (FCT) – under the auspices of the National Human Rights Commission – had set up Judicial Panels/Commissions of Inquiry to investigate allegations of violations of human rights levied against members of the Nigeria Police Force and other security agencies, especially members of the disbanded SARS”.

“Out of the 28 States, 11 States (Abia, Ekiti, Enugu, Gombe, Kwara, Nasarawa, Ogun, Ondo, Osun, Plateau, and Rivers) have submitted their final reports to Council. Governors of other States have also indicated that their reports would be submitted soon. Following deliberations on the recommendations of the panels, NEC agreed/resolved as follows:

Each State, in collaboration with the Federal Government, shall establish modalities for the settlement of all monetary compensations awarded by the Panels. Already, as resolved by NEC, a number of States have set up Victims Compensation Funds, from which several victims have already received payments of sums awarded to them by the panels.

Mohammed however noted that the Council directed State Governors to immediately forward copies of final reports of the panels to their Attorneys-General for prompt arraignment and prosecution of all indicted persons.

“Where incidents in the reports relate to matters of discipline, in addition to prosecution, NEC urged the Nigeria Police Force to take disciplinary action on the affected officers in line with the provisions of the Police Act 2020”, he said.