President Muhammadu Buhari is currently presiding over the quarterly meeting of the National Security Council (NSC) at the State House, Abuja. 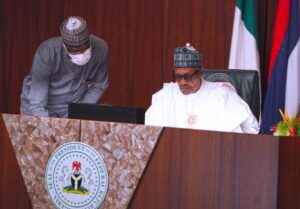 President Buhari and Boss Mustapha at the meeting

Aso Rock insiders said the #EndSARS protests with its attendant violence is top on the agenda. The Service Chiefs are expected to make their briefings on the matter as it was said to have constituted a serious security breach at a time.