Governor Babajide Sanwo-Olu of Lagos State says he’s a kind of governor who loves to connect with the people rather than stay aloof from them. According to him, this is why he opted to live in the Marina and go to his office in Ikeja. 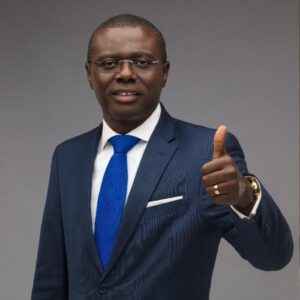 He said living in Ikeja will mean driving from his home to office within three to five minutes but living on the Marina means he has to traverse the state every day to access his office in Ikeja, adding, “this gives me the opportunity to know the people, understand their plight and experience their pain.” He spoke at a meeting with some senior journalists in Lagos on Saturday.

Sanwo-Olu who has a history of simplicity and humility said Friday, November 27, 2020 was one of the happiest days of his life since assuming office because in the course of going to commission some projects in Apapa area of the state, he insisted on trekking over hundreds of metres to the venue and he was able to feel the real people of Lagos.

“When we got to a particular point and I asked my team how far are we from the venue and they told me, I insisted, against entreaties that it was risky,  that we should walk to the place. And I enjoyed it because many people trooped out and I could chat with them; I saw children and their mothers. Some of them were in tears of joy and I could hear them clearly praying for us and telling us what their needs are. To me, that made my day. That is the kind of leader I chose to be: one who is connected to his people and at peace with them, not one who is far removed from his constituents.”

Sanwo-Olu who officially dropped the prefix ‘His Excellency’ from the beginning of his tenure also hinted that the state is already consulting with relevant stakeholders to begin the process of paying compensation to business owners who suffered losses during the carnage that later highlighted the #EndSARS protest.

He explained that the compensation may not cover all their losses but it is a show of good faith by the government.