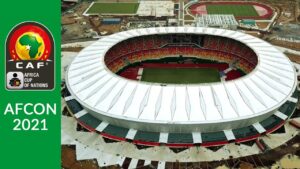 As the 33rd edition of the Africa Cup of Nations (AFCON) begins on January 9, with host nation Cameroon kicking it off against Burkina Faso, , the English Premier League (EPL), the most watched league in Africa and in the rest of the world is set to lose no fewer than 30 African players.

Africa has a huge contingent of players plying their trade in the EPL and most of them have indicated interest to play for their countries. The soccer festival, the biggest soccer show on the continent, draws to a close on Sunday, February 6. The earliest possible release date for any of the players by their country is January 20, when the group stage comes to an end.

Liverpool could be the hardest hit as they are set to lose Mohamed Salah, Sadio Mane and Naby Keita, three key players in the team.

Below are EPL teams and African players they will lose to AFCON:

Mahmoud Trezeguet, Bertrand Traore and Marvelous Nakamba have all been named in the squads for their respective nations, being Egypt, Burkina Faso and Zimbabwe.

Brentford will lose only Frank Onyeka to the Nigeria squad

Chelsea will lose their No 1 keeper Edouard Mendy to Senegal.

Leicester are set to lose four players: Kelechi Iheanacho and Wilfred Ndidi to Nigeria;  Nampalys Mendy to Senegal, and Daniel Amartey to Ghana.

City will lose only Riyad Mahrez  to Algeria.

Manchester United will lose only Eric Bailly to Ivory Coast.

Southampton will be without just one player, Moussa Djenepo who will Mali squad

West Ham will be without Said Benrahma (Algeria)

Wolves who will lose only Romain Saiss (Morocco).

Lagos to Delta by Road: Witness to ...