Everton claimed a sixth win from nine away games this season as Alex Iwobi’s opener and Michael Keane’s late header earned them a 2-1 victory at Wolverhampton Wanderers. 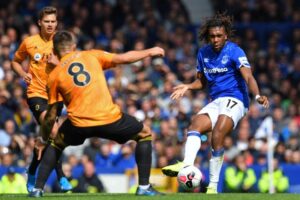 The win moved Everton into fourth spot in the English Premier League (EPL) on Tuesday. Same time, Paul Pogba latched on a pin-drop pass to drive home a canon for Manchester United lone goal victory over hosts Burnley. The goal was all they needed to go top of the log.

A lively opening saw Alex Iwobi fire Everton in front early in the sixth minute before Ruben Neves replied for Wolves in the 14th minute.

Wolves had looked the more likely winners in a dull second half but Keane’s towering header in the 77th minute sealed maximum points for Carlo Ancelotti’s side.

Everton moved into the top four with 32 points from 17 games while Wolves dropped a place to 14th spot with 22 points.

“I thought we showed brilliant character. We had a few players missing today but showed the strength of the squad,” the former Burnley defender said.

“We are a massive threat from set plays. It wins us games. So, it is massive. I thought the lads did really well. Everyone worked their socks off.”

Everton have scored nine headed goals this season, more than any other team in the top flight.

Keane’s effort would have got a nod of approval from the club’s former aerial wizards such as Bob Latchford and Duncan Ferguson.

When Andre Gomes had the ball out on the left there appeared to be no immediate danger.

But his outswinging cross was met by a soaring Keane whose thumping header arrowed into the corner past a helpless Wolves goalkeeper Rui Patricio.

It was slightly harsh on Wolves who almost levelled again when Neves curled a free-kick against the outside of the post.

Iwobi has often flattered to deceive since joining from Arsenal but his sixth minute opener was beautifully taken.

A sweeping move saw James Rodriguez pick out Lucas Digne and his ball inside was met sweetly by Iwobi whose first-time shot took a slight deflection off Conor Coady and past Patricio.

Wolves trailed for only seven minutes though as Neves showed great skill to direct a volley past Jordan Pickford from Rayan Ait-Nouri’s driven cross.

Everton were well-organised in the second half, however, and Keane’s header continued their superb away form.

“If you win here you have to have a good performance. We had a good game,” Ancelotti said.

“The game was in the balance. But we won, thanks to Michael Keane who scored a fantastic goal.”(Reuters/NAN)

Varsity resumes January 18 with ‘No Facemask, ...