Ex-governor Segun Oni of Ekiti State has joined others to condemn the violence and killings that characterised the Ekiti East Constituency 1 bye-election in Ekiti held on Saturday. 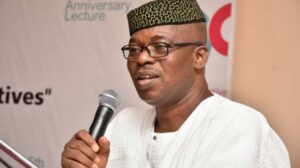 Oni, in a message in Ado-Ekiti on Sunday, described the development as very unfortunate and a slap on the nation’s democratic system.

The former governor said he had suspended all political activities for seven days in solidarity with those who lost their lives in the incident.

According to him, “the official inauguration of the Ijero Local Government Campaign House, which was already scheduled, is hereby suspended to honour the dead”.

Oni said the incident was disheartening and wondered why innocent souls could be taken away in a poll conducted for less than 25,000 electorate.

He called for the arrest and prosecution of those involved in the senseless violence and killing.

Besides, Oni called on the families of the victims of the electoral violence to embrace peace for normalcy to return to the communities.

He stressed the need for members of the Peoples Democratic Party to remain calm in the face of provocation, assuring that the party would achieve its desired victory in the bye-election and future elections in the state.

Three persons were killed and several others injured when violence erupted during the election in Omuo-Ekiti on Saturday.

The Independent National Electoral Commission (INEC) had also announced the suspension of the bye-election following the bloody attacks.

Dr Tella Adeniran, the Resident Electoral Commissioner (REC) in the state, announced the suspension in Ekiti and also confirmed that three persons were short dead during the exercise.

Gov. Kayode Fayemi of Ekiti had earlier condemned the killing and called on security agencies to arrest and prosecute the perpetrators of the act. The constituency seat became vacant following the death of its representative, Mr Adegbuyi Oluwajuwa. (NAN)

E-commerce through and through: My experience with ...